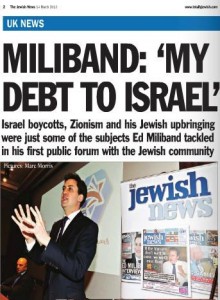 Labour Party Leader Ed Miliband has said that he is proud to be a friend and supporter of Israel, and has called for zero tolerance for those who question Israel’s right to exist or who advocate boycotts of Israel; a month earlier Shadow Foreign Secretary Douglas Alexander spoke of his admiration for Israel and the need to strengthen bilateral relations, and calls for renewed efforts to achieve a negotiated two state solution

Labour Party leader Ed Miliband asserted last month that he was “a supporter of Israel,” whilst speaking at a large public event organised by the Board of Deputies on 7 March. The Labour leader affirmed his opposition to anti-Israel boycotts, stating: “I think the boycotts of Israel are totally wrong. We should have no tolerance for boycotts. I would say that to any trade union leaders.”

Condemning George Galloway MP’s recent refusal to debate with a student because of his Israeli nationality, Miliband told the audience that he was “intolerant of those who question Israel’s right to exist.”

The Labour leader said he wanted the party to be an “honest-broker in seeking the two state solution and the furthering of the peace process.” Speaking of the Labour party’s support for the Palestinian bid for UN statehood, Miliband explained that the policy position was taken to “encourage moderate Palestinians and work in an even-handed way.”

The previous month, Shadow Foreign Secretary Douglas Alexander also spoke of his goal of strengthening relations with Israel, promoting a negotiated two state solution, and challenging the threats posed by Iran and Hezbollah.

Speaking to a large Jewish audience in North London on 7 February, and answering a wide range of questions, Douglas Alexander set out his approach to the Middle East. Calling for closer ties with the “dynamic democracy” of Israel, he drew attention to the work the shadow cabinet is doing to learn from Israel’s success in innovation, including last autumn’s hi-tech-focused visit to the country led by Shadow Business Secretary Chuka Umunna and Shadow Welfare Secretary Liam Byrne.

Calling for renewed US and EU efforts to encourage a resumption of peace negotiations between the Israeli and Palestinian leaderships, Douglas said Labour’s support for the Palestinians’ UN upgrade should be judged in the context of concern that continued lack of progress is weakening moderate Palestinians, endangering the prospect of achieving a two state solution.

When an audience member raised the issue of a recent question in the House of Commons from Labour’s front bench, asking the government whether it would seek to use EU-Israel trade as leverage in the peace process, Douglas rejected this proposition. Asserting that “it was a question, not Labour policy,” the shadow foreign secretary repeated that he wants to strengthen ties with Israel, not weaken them, and spoke of his opposition to boycotts.

On Iran’s illegal nuclear programme, he backed the international community’s dual track policy of tough sanctions alongside genuine offers of negotiations, and spoke of his disappointment that the Iranian regime is continuing to refuse talks. He asserted that no options should be taken off the table.

He also called for urgent efforts to encourage the EU to proscribe the military wing of Hezbollah, the Iranian-backed terrorist organisation recently found by the Bulgarian authorities to be responsible for last July’s deadly Burgas airport bus bombing. Douglas Alexander welcomed the international pressure that Hezbollah is under over its role in the on-going “butchery in Syria.”

Discussing the case of David Ward MP, the shadow foreign secretary spoke of his “fear that boundary between legitimate criticism of Israeli policy and some of the worst and most familiar tropes of anti-Semitism becomes blurred.”

The event was hosted by the Jewish News, organised in partnership with the London Jewish Cultural Centre, with support from the Jewish Leadership Council.