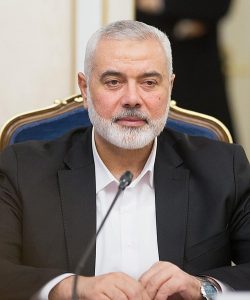 The head of Hamas has admitted it refused a recent offer of $15bn in aid for Gaza because it was conditioned on the terror group giving up its arms. Ismail Hahniye said that the proposed aid package also contained a pledge that Israel and Egypt would lift their blockade of Gaza, which was imposed when Hamas launched a violent coup which overthrew the Palestinian Authority’s control of the coastal enclave in 2007. Haniyeh said the proposal was unacceptable because it was conditioned on Hamas giving up its weapons and accepting the PA’s authority in Gaza. The offer is thought to have been made in the context of the US administration’s Middle East plan which envisages $13.38bn in aid to Gaza and a Palestinian state in Gaza and 70 percent of the West Bank if Hamas agrees to disarm. “There were parties that came to us two months ago, who we know had been paid off by major powers. They offered us new projects in the Gaza Strip worth about $15bn,” Haniyeh told the Qatari newspaper al-Lusail. “Of course, we said this is excellent, we want to establish an airport, port, and economic development projects in the Gaza Strip.”

Haniyeh, who lives in Doha, said the proposal came with strings attached which Hamas found unacceptable. “We learned that, in exchange, we would have to dissolve our military factions and integrate them into the police and retire our weaponry, especially heavy weapons, the rockets that hit Tel Aviv and beyond, and dissolve the capability of Gaza for self-rule,” Haniyeh said. Haniyeh also made clear Hamas is sticking to its hardline demands, including the destruction of Israel. “Our principle is Palestine from the river to the sea, the right of return, the liberation of prisoners and the establishment of a full sovereign Palestinian state with Jerusalem as its capital,” he said. Read full article