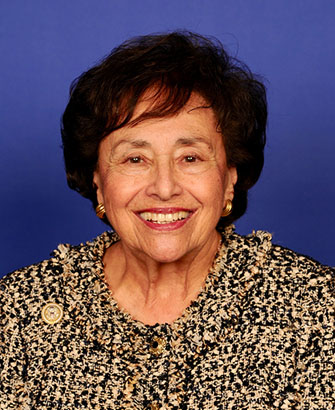 The US Congress has passed a historic bill which will provide a $250m boost to coexistence work in Israel-Palestine, as well as Palestinian economic development. The legislation, which received bipartisan support, was signed after days of prevarication by Donald Trump between Christmas and the new year. It is a major victory for the Alliance for Middle East Peace’s decade-long effort to establish an international fund for Israeli-Palestinian Peace. Labour Friends of Israel has led the UK campaign on behalf of the fund, which is modelled after the International Fund for Ireland and would invest in people-to-people work which brings Israelis and Palestinians together. The Nita M Lowey Middle East Partnership for Peace Act provides $110m over the next five years to peacebuilding projects. It also establishes a new Joint Investment for Peace Initiative providing $140m in support to Palestinian-owned SMEs. Lowey (pictured), a veteran Democrat congresswoman who retired this month, pushed the bill through Capitol Hill with the support of Republican Jeff Fortenberry. The legislation also leaves open the door to other international actors both donating to the fund and participating in its governance, with two seats on its governing body available for non-US players. LFI’s former chair, Joan Ryan, visited Washington DC in November 2016 to meet members of Congress and support the drive for the international fund. In November, LFI MPs staged a Westminster Hall debate in parliament as part of our campaign, and won the backing of shadow Middle East minister Wayne David. The UK government became the first in the world to support the notion of an international fund and in 2017 boosted its spend on people-to-people work to $3m over three years. It has since, however, axed all UK support for coexistence work.
Read full article