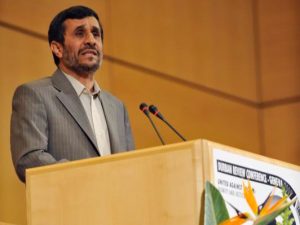 The British government confirmed this week that it will boycott the Durban IV conference in New York over “historic concerns” about antisemitism and anti-Israel hatred.

The UK will join the US, Australia and Canada in refusing to attend the event in September marking the 20th anniversary of the infamous 2001 Durban Conference.

The original conference in South Africa, organised to consider racism, was hijacked by antisemitism and anti-Israel rhetoric.

Israel was repeatedly singled out for unique criticism, while Zionism was equated with racism. Protestors reportedly intimidated Jewish delegates, antisemitic placards featuring swastikas and fanged Jews were raised, and copies of antisemitic conspiracy theories were distributed.

Durban II, which took place in 2009, saw Iranian president Mahmoud Ahmadinejad equate Zionism with racism and deny the Holocaust, claiming that Israel was founded on the “pretext of Jewish suffering”.

This precedent of antisemitism and anti-Israel rhetoric is thought to have been the basis for the UK government’s decision to boycott.

Karen Pollock of the Holocaust Educational Trust said that the government had “done the right thing by taking a principled stance”.

The boycott decision was also welcomed by Marie van der Zyl, president of the Board of Deputies, and JLC co-chief executive Claudia Mendoza.

In a statement, Mendoza said that “people need to be under no illusions, this conference exists to delegitimise Israel and legitimise anti-Jewish racism”.