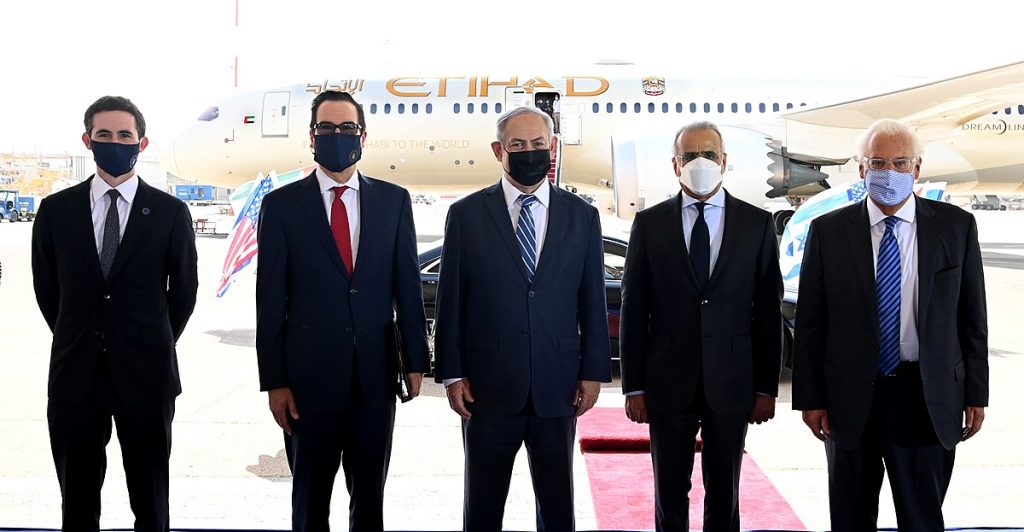 A high-level delegation of ministers from the United Arab Emirates arrived in Israel on Tuesday – the first-ever official such visit.
It followed the parliamentary ratification by Bahrain and the UAE on Monday of their normalisation agreements with the Jewish state. The Knesset gave its assent to the Abraham Accords, which were announced in August, last week.
The UAE economy minister, Abdulla Bin Touq Al Marri, and minister of state for financial affairs, Obaid Humaid Al Tayer, flew into Tel Aviv’s Ben-Gurion airport on Tuesday lunchtime, accompanied by the US treasury secretary, Steve Mnunchin, and Avi Berkowitz, the US administration’s envoy to the Israeli-Palestinian peace process. They were welcomed by Benjamin Netanyahu and foreign minister Gabi Ashkenazi. “Today we are making history in a way that will stand for generations,” Netanyahu said at the welcoming ceremony. “We are working together to change the Middle East for the better. We are all sons of Abraham.”
An agreement for visa-free travel between Israel and the UAE is to be signed, together with bilateral agreements in the areas of aviation, investment protection, science and technology.
On Monday, Etihad Airways Flight EY9607  landed at Ben-Gurion airport – the first commercial shuttle from the UAE to Israel. It followed an agreement between the two countries, which was announced on Sunday, for 28 weekly direct flights. Read full article