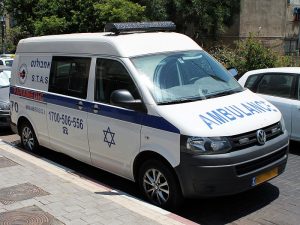 Ambulance in Israel. MediaPhoto.org, CC BY-3.0, via Wikimedia Commons

Two people have died and 167 injured, give of them seriously, after a stand supporting dozens of worshippers collapsed during a Shavuot celebration on Sunday night.

The events took place in Givat Zeev, an Israeli settlement in the West Bank near Jerusalem.
The accident occurred at a synagogue that was still under construction, raising further concerns about safety measures at large ultra-Orthodox events.

The accident came just weeks after 45 people died in a crush at Lag B’Omer celebrations at Mount Meron, in northern Israel.

A police official said that some 650 worshippers were at the site when the accident took place. Security footage showed a crowded stand collapse and worshippers fall on top of each other.
Local officials said that the event had gone ahead despite lacking a relevant permit and against official warnings that the building zone was unsafe.

“We were called again to another event where there was negligence and a lack of responsibility. There will be arrests”, said Jerusalem District police chief Doron Turgeman.

Medics later confirmed the deaths of a 40-year-old man and a 12-year-old boy, who were not immediate identified.