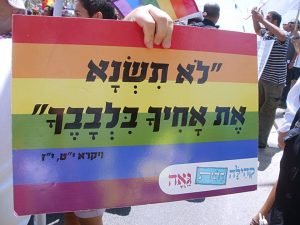 Some 8,000 people marched, sang and danced through Jerusalem last week as the city marked its first Pride parade since coronavirus restrictions were relaxed.

Participants held flags, balloons and banners as they celebrated in a city that has seen some hostility against LGBT+ people in recent years, especially compared with liberal and secular Tel Aviv.

The parade was protected by 3,000 police officers, while other security measures were put in place ahead of this year’s event.

2021 marked the 20th anniversary of Jerusalem’s first Pride parade. One participant, Nissim Nakhoum, said: “I think it’s important to be here. This is the capital and we should show people that we are here, that we are present.”

He added: “And I think it is very important that we can teach that if there is someone that is afraid to get out of the closet like I was, it is okay, you can be yourself”.

Despite reports of a planned far-right counterdemonstration, no major incidents were reported.
Israel is the only country in the Middle East that recognised same-sex unions, and Tel Aviv Pride is Asia’s largest LGBT parade.

Among Israel’s neighbours, homosexual acts are illegal in Egypt, Syria and the Gaza Strip, effectively decriminalised in Lebanon and the West Bank, and legal in Jordan.