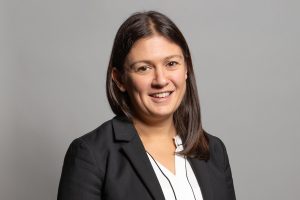 Shadow foreign secretary Lisa Nandy has said that Labour will “always believe that Israel has the right to defend itself” against attacks.

Speaking at an event in Manchester, Nandy also voiced her opposition to a complete ban on weapons sales from the UK to Israel.

She said both herself and shadow Middle East minister, Wayne David, “didn’t support the blocking of the sale of weapons to Israel that helped it deflect rocket attacks”.

Nandy added: “Israel has a right to defend itself and Israel’s citizens have a right to live in peace and security”.

Nandy was speaking at an event, organised by the Jewish Representative Council of Manchester and the Jewish Leadership Council.

Reflecting on the experience within Labour, and during the May 2021 conflict earlier this year, Nandy said that there were people who use the Israeli-Palestinian conflict to “spout hate and divide people”.

Reiterating Labour’s support for a two-state solution and opposition to the BDS movement, Nandy also confirmed that Labour is against the UN singling out Israel, and would vote against it in government.

She suggested for the first time that Labour supported the government’s position of voting against all Agenda Item 7 motions at the UN Human Rights Council, which is most often used to criticise Israel disproportionately.

Relatedly, Nandy confirmed that Labour supported the Government’s decision not to attend the Durban IV conference this September, saying “We shouldn’t be supporting the promotion of antisemitism”.

Asked about a social media post put out by Labour during the conflict that made no reference to Hamas rockets, Hamas admitted that this was “a mistake”.