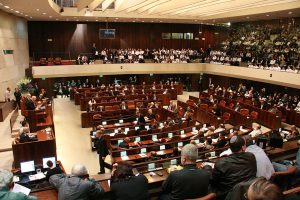 The Knesset gave initial approval to a bill limiting prime ministers to a maximum of eight years in office on Monday night.

The coalition government passed the legislation’s first reading by 66 votes to 40 votes, with the Israeli-Arab majority Joint List party joining the government to support the bill.

The legislation will encounter two more plenum readings and the Constitution and Law Committee before becoming law.

The bill, amending Israel’s constitutional Basic Laws, would force a prime minister to step down after eight consecutive years in power, to be followed by a new government, though not necessarily new elections.

The bill also bars a former prime minister from resuming the office within a minimum of three years since they left office, even if they have already served two non-consecutive terms previously.

The bill would reset the eight-year counter if the gap between the tenures is more than three years.

Presenting the law, justice minister Gideon Sa’ar said that “prolonged rule of one person is a harmful thing. In the fact of the dangers of excessive concentration of power, and the resulting corruption, we offer a better and more balanced arrangement that a large majority of Israeli citizens prefer to the threat of unlimited tenure”.

The bill has been opposed by Benjamin Netanyahu’s Likud, despite it not applying retroactively, and therefore not preventing Netanyahu from running for office again.