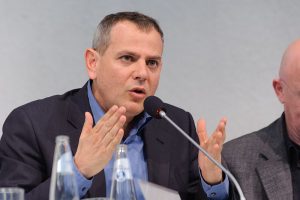 The field hospital, named Kochav Meir (‘Shining Star’), opened two weeks ago some 90 minutes west of Lviv.
More than 1,500 Ukrainian refugees have thus far been treated at the hospital, with some 80 medical officials leaving Israel at the weekend to relieve the medical staff.

“This is the first visit of an Israeli minister to Ukraine” since the invasion, Horowitz said, adding: “and it is undoubtedly an expression of our commitment to aid the Ukrainian nation in its time of need”.

Horowitz asserted that Ukraine was not fighting for its survival alone, but was backed by “the entire democratic world, which Israel is a part of”.

“We will continue to do all that we can to assist the Ukrainians against the Russians’ brutal attack”, he added.
Ukrainian foreign minister Dmytro Kuleba tweeted his appreciation for Israel’s efforts in operating the field hospital, saying: “I thank [the hospital’s] team of Israeli physicians and paramedics for their important humanitarian mission and tireless work to help Ukrainian men, women and children at this difficult time”.