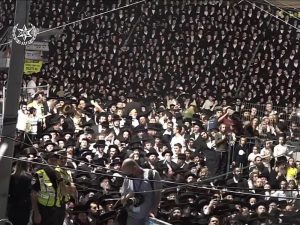 Israel experienced its worst ever civilian disaster last week, when a stampede at Mount Meron in the northern Galilee led to the deaths of at least 45 people.

More than 100,000 people, mostly ultra-Orthodox Jews, gathered at the annual Lag B’Omer celebrations, which include visits to the gravesite of the second century rabbi Shimon Bar Yochai. Congestion built on a narrow, sloping walkway as crowds began to exit, causing people to slip and others to fall on them. The result was lethal crushing, made worse by police barriers restricting further movement.

Prime minister Benjamin Netanyahu promised an inquiry into the tragedy, calling it “one of the worst disasters that has befallen the State of Israel”.

The victims, all male, included brothers, children as young as nine, young fathers and rabbis. At least two families are thought to have lost multiple children. Among the victims of the fatal crush were 10 foreign citizens, including six Americans, two Canadians, an Argentine and a British national.

The British national was Moshe Bergman, 22, from Salford. He was studying to become a rabbi in Israel, where he lived with his wife of 18 months. In a statement from  Bergman’s family, he was described as a “wonderful and dedicated husband, son and brother”.