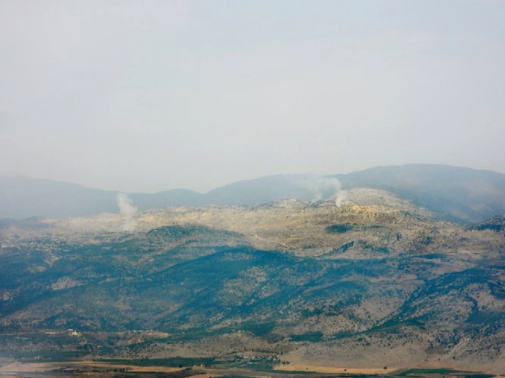 Israel successfully repelled a Hezbollah attack on its northern border on Monday amid rising tensions between the Jewish state and the Iranian-backed terror group. A spokesperson for the IDF said about five Hezbollah operatives had crossed several metres into Israel in the Har Dov area, also known as Shaba Farms, in the Golan Heights. The men retreated into Lebanon after Israeli forces opened fire. There were no Israeli casualties, although residents of the area were ordered indoors for a short period after the exchange of artillery between the two sides. The thwarted attack follows a suspected Israeli airstrike in Syria last week on pro-Iranian militants in which a Hezbollah fighter was killed. Hezbollah denied Israel’s account of the incident yesterday, saying: “Everything claimed by the Israeli media and the IDF about a Hezbollah infiltration… is an attempt to invent false Israeli victories.” However, the terror group vowed that revenge for the airstrike “will definitely come,” and warned that “Zionists only have to wait for punishment for their crimes”.

Lebanese media reports appear to validate Israel’s recounting of events. The Hezbollah-linked Al Mayadeen satellite television channel said that Hezbollah had launched a Kornet guided missile. Separately, Lebanese sources confirmed that Hezbollah had carried out an operation against the IDF in the Shaba Farms area. Before the incident, Israel Hayom security analyst Yoav Limor said Hezbollah secretary-general Hasan Nasrallah would seek to avoid a major escalation: “Nasrallah doesn’t want war. He’s in unprecedented distress. Lebanon is in a state of economic collapse and is on the verge of insolvency. The unemployment rate has spiked. Since Hezbollah is part of the government, is perceived as being part of the problem.” Read full article