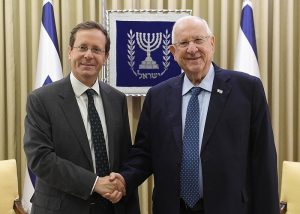 Isaac Herzog was sworn in as Israel’s eleventh president on Wednesday, with a promise to “lower the flames, to calm things down”.

Herzog, a former leader of Israel’s Labor party and former chairman of the Jewish Agency, told members of the Knesset that he took his vow to act as a statesman during a time of polarisation seriously.

“I will set out to complete the task every morning to be the president for all”, he said.

“In normal times, this task would almost sound naïve”, he continued. “Unfortunately, however, these are not normal times”.

“These are days when statesmanship has been swept away by polarisation. Days in which the unifying ethos and the shared values are more fragile than ever”.

Herzog was sworn in on the same Bible used by his father, Chaim Herzog, in 1993 upon his own inauguration as Israel’s sixth president.

The book belonged to Sarah Herzog, the incoming president’s grandmother, who used it during her childhood in Glasgow.

Isaac Herzog secured 87 votes in the first round of Knesset voting for the presidential election last month.

This represented the largest ever margin of victory for an Israeli presidential candidate.

Given the fierce ongoing divisions within Israeli politics, the scale of Herzog’s victory was stark.