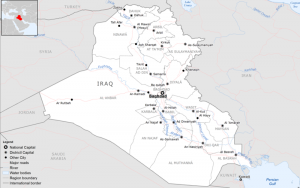 Iraq base map > ERCC Portal, CC BY 4.0, via Wikimedia Commons.

More than 300 prominent Iraqis made an unprecedented plea for regional reconciliation on 25 September, as they called for their country to normalise ties with Israel.

“We demand full diplomatic relations with the State of Israel […] and a new policy of normalisation based on people-to-people relations with the citizens of that country”, said Wisam al-Hardan, who commanded Sunni tribal militias that aligned with the US following the 2003 invasion.

The conference, in the Kurdish city of Erbil, saw Iraqi participants call on their countries’ leaders to join the Abraham Accords, which normalised Israel’s relations with the UAE, Bahrain, Morocco and Sudan in 2020.

“Abraham, peace be upon him, birthed a nation that paved the way for peace. Today, we and all his descendants from the three main religions bear responsibility to complete this path together”, said Major General Amir al-Jubouri, a former senior Iraqi army commander.

Al-Harden contrasted the states that had joined the Abraham Accords with what he deemed the “warlordism and devastation” evident elsewhere in the region.

“We must choose between tyranny and chaos on the one hand, and an emerging axis of legality, decency, peace and progress on the other”, he continued.

Iraq has officially been at war with Israel since the Jewish state was founded in 1948. Iraqi law continues to impose strict penalties on people who conduct relations with Israelis.

Indeed, until 2010 association with “Zionist organisations” was punishable by death.

The conference of Sunni and Shi’ite Muslim tribal leaders, social activists and former military commanders, was organised by the New York-based Center for Peace Communications.