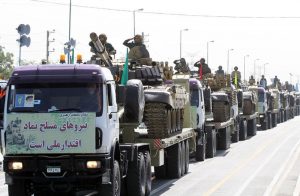 Zarif claimed that IRGC commander Qassim Suleimani, who was killed by the United States in January 2020, had consistently undermined him, working with Russia to sabotage the 2015 Iran nuclear deal and seeking to prolong the Syrian civil war. “In the Islamic Republic the military field rules”, Zarif said in the recording. “I have sacrificed diplomacy for the military field rather than the field servicing diplomacy.”
The recording was part of a three-hour taped conversation as part of an oral history project documenting the Iranian administration’s work.

The leak comes at an important moment for Iran, as the country enters negotiations for a return to the 2015 nuclear deal. Zarif’s claims confirm the longstanding suspicion that his role is severely constrained. Decisions, he claimed, are dictated by the supreme leader – or frequently the Islamic Revolutionary Guards Corps.

The IRGC has a long history of malign activity towards Israel. It is a prominent supporter of both Hezbollah and Hamas and has taken advantage of Syria’s civil war to expand its influence there. A number of terrorist plots in Europe, including in north London, have been linked to IRGC proxies.