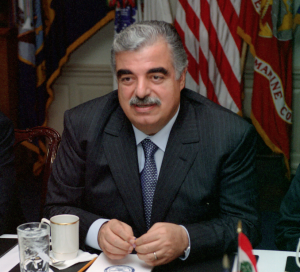 A United Nations special tribunal last Friday sentenced a member of Hezbollah to five life sentences for his role in the 2005 assassination of Lebanese prime minister Rafiq al-Hairi.
Hairi (pictured), who was murdered in a bomb attack on his motorcade, had been attempting to curtail Syrian influence in Lebanon. The Iranian-backed Hezbollah terror group, which today controls the Lebanese government, was immediately suspected of involvement in the attack in which 21 other people died. Syria, which is allied to Hezbollah and occupied Lebanon for nearly 30 years, withdrew from the country shortly after Hairi’s assassination, following international pressure.
The UN-mandated Special Tribunal for Lebanon found Salim Jamil Ayyash, one of four men charged with belonging to a cell that carried out the attack, guilty of five charges: conspiring to commit an act of terrorism; criminal association; committing acts of terrorism; intentional homicide with premeditation; and attempted intentional homicide with premeditation. The tribunal wrapped up its 11-year investigation in August. Ayyash, who was tried in absentia, received a life term for each of the five charges when judges handed down their sentences last week. An international arrest warrant has been issued. Ayyash’s three alleged accomplices were acquitted on grounds of insufficient evidence connecting them to the assassination. None of them have been located nor any signs of life established.
According to the Washington Post, Ayyash was a member of a dedicated hit squad that carried out at least four other assassinations under orders from Hezbollah. The panel was unable to determine who ordered Hairi’s murder, but tribunal member Judge Janet Nosworthy said Ayyash “had a central role in the attack”.
Read full article