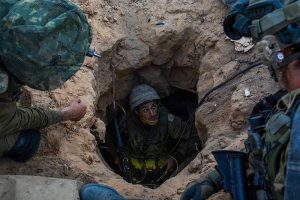 The UN Relief and Works Agency (UNRWA) has condemned the construction of a terror tunnel under a school complex it operates in the central Gaza Strip.

UNRWA confirmed that no people were injured by Israeli strikes on the tunnels, which it claimed took place on 13 and 15 May.

An UNRWA assessment on 31 May revealed “the depth of the cavity is approximately 7.5 meters below the surface of the school. UNRWA discovered the existence of a possible tunnel in the context of the investigation of the fired missiles”.

There is a long history of UNRWA schools in Gaza being used to store and launch rockets at Israel, especially during the 2014 Gaza war. In 2017, the agency announced the discovery of a Hamas tunnel dug underneath one of its schools.

In one instance last month, the IDF determined that the courtyard of at least one school housed 14 underground rocket launchpads, which were apparently used during the fighting.

Given the use of schools in Gaza as refugee centres during times of conflict, it is official IDF policy to avoid striking them unless unavoidable.