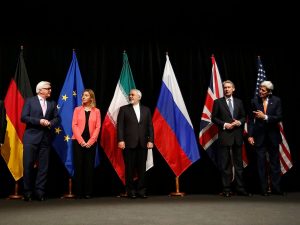 German foreign minister Heiko Maas said on Monday that he was confident of reaching a deal to save the 2015 Iran nuclear accord “in the coming weeks”.

“We think (the talks) can reach their goal”, he told reporters in Madrid after a gathering of the Stockholm Initiative, a group of 16 states working towards nuclear disarmament.

“I think we’ll get there in the coming weeks”, Maas added of the Iran talks that resumed in April in Vienna.

The negotiations aim to save the deal between Iran and the five permanent UN Security Council member states plus Germany.

Under the Trump administration, the US walked away from the deal designed to prevent Iran from developing a nuclear weapon.

Stockholm Initiative member states’ foreign ministers were meeting ahead of the next Review Conference on the NPT, which has been delayed until early next year due to the coronavirus pandemic, Spanish foreign minister Arancha Gonzalez Laya said.

The initiatives members include current co-chairs Germany, Spain and Sweden, as well as Argentina, Canada, Japan, Jordan, Norway and Switzerland.