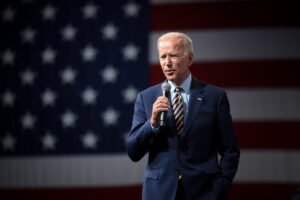 Joe Biden will visit Israel in the coming months, the White House and the Prime Minister’s Office announced in a statement on Sunday. The statement was issued following a call between the president and Naftali Bennett in which they discussed Iran, regional issues and the tensions in Jerusalem.

The prime minister later described Biden as “a true friend of Israel”. Although a date has yet to be set, it is believed the president will visit the Jewish state in early summer.
Bennett also briefed Biden on the unrest in Jerusalem.

The White House also announced that Israel’s national security advisor, Eyal Hulata, will travel to Washington this week. Top of Israel’s priorities is a diplomatic effort to ensure that the US does not cave in to Iranian demands to remove the Islamic Revolutionary Guard Corps from its list of designated terror groups. The issue remains a sticking point in the stalled Vienna talks to revive the 2015 nuclear deal. “The Revolutionary Guards are the largest terrorist organisation in the world. I am sure that President Biden, a true friend of Israel who cares about its security, will not allow the Revolutionary Guards to be removed [from the list],” Bennett said.

The White House is believed to share Israel’s view, in contrast to the State Department, which is reportedly willing to concede the move to Tehran.

Meanwhile, Israeli media reports suggest today that the Biden administration is close to admitting the Vienna talks have failed and the nuclear deal may not be revived.
Read full story