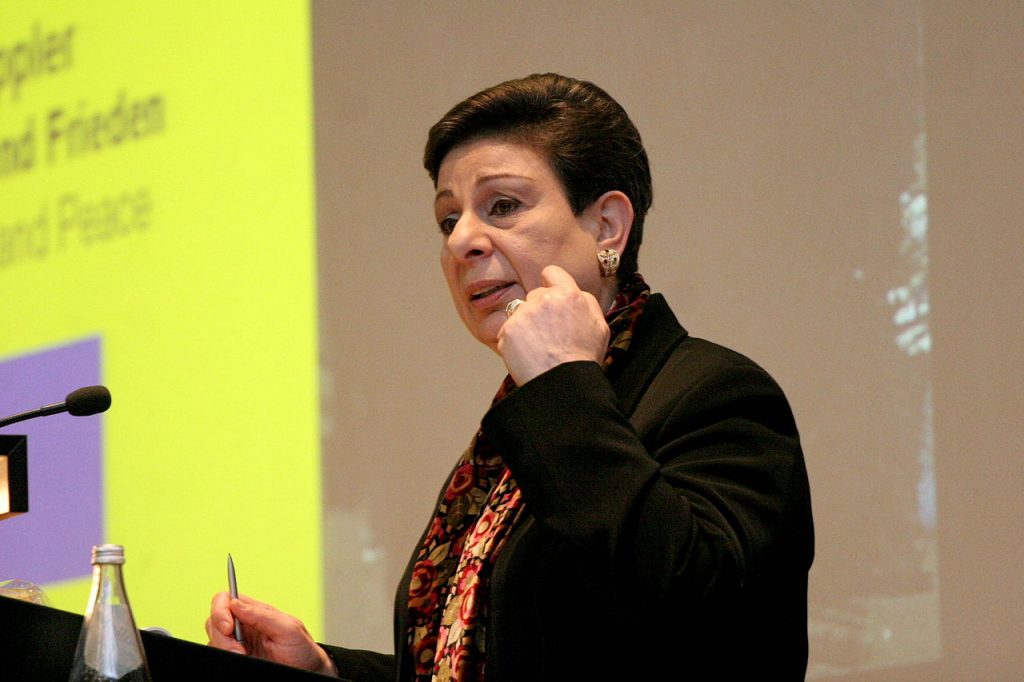 Hanan Ashrawi, who rose to international fame when she headed the Palestinian delegation to the landmark 1991 Madrid peace talks, has reportedly resigned from the PLO’s Executive Committee. Ashrawi is thought to have quit in protest at the decision of the Palestinian Authority to resume civilian and security coordination with Israel. Sources told the Al-Araby Al-Jadeed newspaper that Ashrawi “was angry with how the issue was handled”.
Her resignation, delivered in a letter to the Palestinian president, Mahmoud Abbas, has not yet received a response. However, Abbas has reportedly told Ashrawi that he doesn’t intend to accept her resignation, arguing that such a decision must be made by the Palestinian National Council, which appoints PLO Executive Committee members. The secretary-general of the PLO, Saeb Erekat, died last month and Abbas had not yet named his successor.
A member of the Palestinian Legislative Council since 1996, Ashrawi is a former PA minister of higher education and the authority’s highest-ranking female politician. The 74-year-old contracted covid-19 in October. She bitterly attacked the normalisation agreement between Israel, Bahrain and the United Arab Emirates which was reached in the summer.
The PA cut off civilian and security cooperation with Israel in protest at Benjamin Netanyahu’s plans to annex West Bank settlements and the strategically important Jordan Valley. Netanyahu subsequently abandoned the plans as part of the Abraham Accords. In tandem with the resumption of civilian and security cooperation with Israel, the PA has also decided to once again begin accepting tax transfers. Under the terms of the Oslo Accords, Israel and the PA formed a customs union and Israel collects VAT, import duties and other taxes on the PA’s behalf, transferring the sums monthly. Last week, Israel released $725m in funds it had been holding. This should ease the fiscal squeeze which saw the PA slash public sector salaries by 50 percent.
Read full article