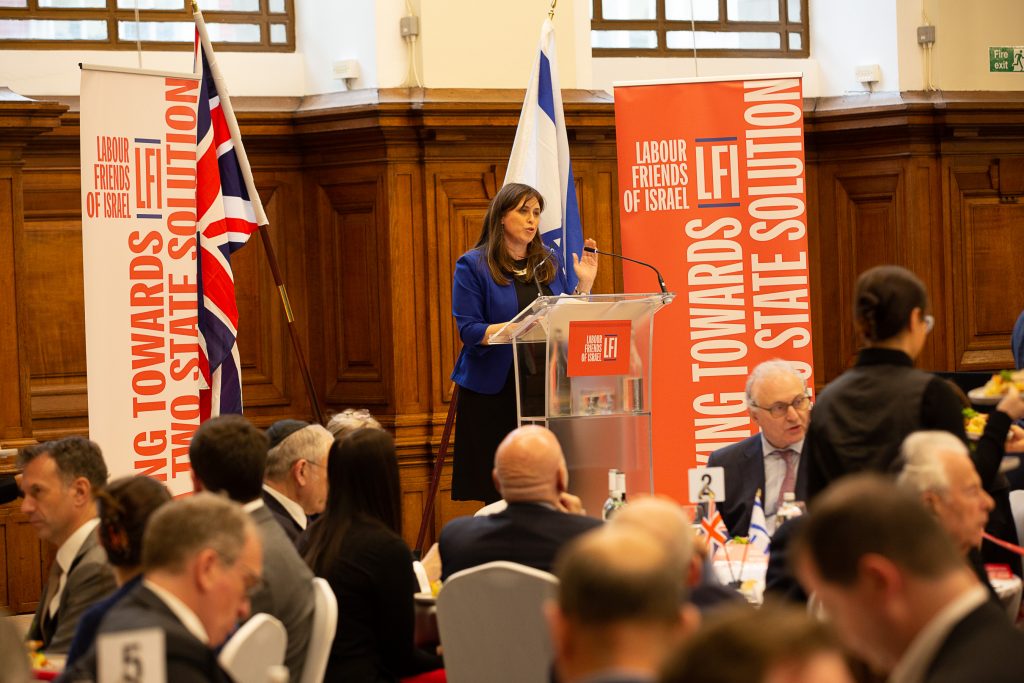 Leader of the Opposition,

Parliamentarians, my fellow guests and speakers.

It is a pleasure to be with you at the LFI Annual Lunch this afternoon.

I want to thank our lunch sponsors, Sir David Garrard and Isaac Kaye, and all of you who have made this event possible through your generosity and support.

I would also like to thank LFI for your work on behalf of the State of Israel.

We are grateful to you, Steve, for your leadership of LFI and the work you are doing following in the footsteps of those loyal friends of Israel, Louise Ellman and Joan Ryan.

I know that the last few years have not been easy for many people in this room: for friends of Israel and British Jews in general.

But you should know that Israel values your unwavering commitment to the world’s sole Jewish state.

We appreciate your willingness to stand up to antisemitism and anti-Zionism whatever its source.

And we share your desire to build greater understanding of, and support for Israel.

The support that we receive from across the political spectrum in the UK strengthens the relationship between Britain and Israel.

A relationship founded upon the promise of the Balfour Declaration.

A relationship built over the decades by a shared commitment to liberal democratic values.

And a relationship rooted in our common desire to safeguard the security of both our peoples, to establish closer economic ties and greater prosperity for all,

and to build new social, cultural and educational bonds between our two countries.

I am proud to serve in Britain at a time when bilateral relations between us have never been closer:

The UK is Israel’s number one destination for investment in Europe;

Israel is the third largest investor in the UK from the Middle East region;

Over 300 Israeli companies operate in the UK across a range of sectors including hi-tech, pharmaceutical and finance.

Fighting common challenges: British and Israeli scientists working together through BIRAX on cutting-edge research to tackle some of the world’s greatest challenges.

And healthier lives: Israeli firms provide up to 1 in 7 of the NHS’ drugs, saving the health service an estimated £2.9billion annually.

The growth and strengthening of the relationship between Britain and Israel over the past decade shows that the BDS movement is failing.

Nor does it represent popular sentiment in Britain.

Less than one in five of the public back BDS against Israel.

By contrast, most see Israel as Britain’s most important ally in Middle East in the fight against terrorism and one of its three most important regional trading partners.

Israel’s new government is working to further strengthen the ties between our two countries.

It is a government which brings together parties from across the Israeli political divide and across communities.

Jews and Arabs working together in pursuit of common goals.

Left and right working together in a spirit of compromise.

This government will continue to seek a just, secure and lasting peace with all its neighbours, including the Palestinians.

That is why Foreign Minister Yair Lapid recently announced a new vision for Gaza – one aimed at creating stability on both sides of the border and the reconstruction and recovery of Gaza.

Let me be clear: Israel has no quarrel with the people of Gaza.

We want the same peace and prosperity for their children as we want for our own.

One obstacle stands before us:

Iran and its proxies…

Hamas, a terror group riddled with antisemitism which brooks no opposition to its rule.

So we ask the international community to work with us to stop Hamas and Iran amassing more weapons of terror by preventing arms smuggling and halting its theft of humanitarian funds.

But we will not allow Hamas, Hezbollah and Tehran to slow our drive to expand and deepen the Abraham Accords as we seek to build a new Middle East.

It represents a battle between two visions of the region:

It is a battle between fear and hope.

And it is a battle between the past and the future.

We urge our allies in Europe to do your part to encourage this opportunity.

I know that all of you in this room – friends of Israel and friends of peace – will wish our country and its neighbours well.

We thank you for your support.

We wish you all the best.

And we offer you our friendship and our solidarity.