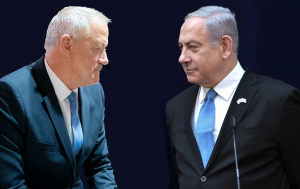 With less than two weeks to go until polling day, Israel appears to be heading towards another general election stalemate – the second in less than six months.

Polls this week show neither Benjamin Netanyahu nor his principal rival, Benny Gantz, have succeeded in opening a decisive lead.

Instead, they give the prime minister’s Likud party and the centrist Blue and White 32 and 31 Knesset seats respectively.

The Joint List, an alliance of Arab parties has 11 seats; Yemina, a right-wing grouping led by former justice minister Ayelet Shaked which brings together the New Right and the Union of Right-wing parties looks set to win 10; and former defence minister Avigdor Liberman’s Yisrael Beitenu nine.

The ultra-Orthodox Shas and United Torah Judaism are showing winning seven seats each.

On the left, the Democratic Camp is predicted to win seven seats and Labor-Gesher six.

Together, the right-wing and religious parties have 56 seats – five short of the 61 needed to secure a Knesset majority – and the centre-left and Arab parties have 55 seats.

Another poll released this week showed similar numbers, but with Blue and White leading Likud by one seat and the right-wing bloc deadlocked with the centre-left.

Thus, as in the first general election of the year, held in early April, Liberman appears to be the kingmaker without whose support Netanyahu will be unable to remain in office. Indeed, it was the prime minister’s failure to secure a coalition deal with Liberman which propelled Israel into this unprecedented second poll. April’s election marked the first time in Israeli history that a poll has not resulted in the formation of a government.

The stumbling block to Netanyahu forming a fifth administration was Liberman’s objection to the watering down of proposals to limit the exemption of ultra-Orthodox young people from serving in the military. Netanyahu needed Liberman’s MKs to assemble a majority coalition, but acceding to his demands meant losing the back of the Haredi Shas and UTJ parties, whose support he also needed.

Liberman’s gamble appears to have paid him electoral dividends: Yisrael Beitenu looks set to increase its number of MKs from five to nine (or even 11) seats. He has also made clear his future price: a national unity government involving both Likud and Blue and White in the full knowledge that Gantz has repeatedly stated that he will not go into any coalition led by Netanyahu while the prime minister remains under the threat of indictment on multiple alleged corruption charges (the prime minister’s pre-indictment hearing will take place next month).

Moreover, Liberman has also ruled out joining a government with the ultra-Orthodox parties, whom Netanyahu calls Likud’s “natural allies”. This week, Gantz appeared to echo Liberman’s language by also ruling out a coalition with ultra-Orthodox or religious-right parties. Instead, he vowed to establish “a liberal unity government that will be based on the majority, not extremists and extortion”. He again made clear that, while he would open talks with Likud, he wouldn’t countenance an agreement with the party if it was still led by Netanyahu. “I think his contributions to the State of Israel have ended,” he stated.

The vagaries of the Israeli electoral system plus a closely fought race has led the parties to scramble for every vote over the summer.

Last week, Netanyahu managed to reach an agreement with the far-right Zehut party. Under the deal, it will pull out of the race in return for the promise of a ministerial post and a pledge to liberalise the medical marijuana market. Under its leader, Moshe Feiglin, Zehut marries an agenda of far-right nationalism with economic libertarianism. Blue and White accused Netanyahu of “teaming up with extremists”. Whatever the ethics of such an agreement, from the prime minister’s point of view it makes political sense: minimising the number of right-wing votes which were likely to be cast for a party which, polls suggested, was unlikely to enter the Knesset and thus provide potential support to any Netanyahu-led coalition.

Earlier in the summer, the prime minister attempted to persuade the Union of Right-wing parties to form a pact with the racist Otzma Yehudit party. Although thwarted on this occasion, the prime minister had successfully lobbied the URWP to link up with Otzma Yehudit prior to April’s elections. As with his deal with Zehut, Netanyahu was worried that “wasted” votes on the far right might cost Knesset seats that he would need to form a governing coalition.

Running alone, Otzma Yehudit is polling beneath the 3.25 percent of the vote threshold needed to win seats in the Israeli parliament. The party also suffered the indignity last week of having two of its leading figures – Benzi Gopstein and Baruch Marzel – barred from running in the elections by the Supreme Court. It accused the latter of making “dozens” of remarks which presented an “unequivocal” sense that he “systematically incites racism against the Arab public” and also suggested the former engaged in “conduct that incited racism”.

The justices thus accepted the recommendation of the attorney general, Avichai Mandelblit, which had called for the two candidates to be disqualified. He based his recommendation on Israel’s semi-constitutional Basic Laws, which stipulates that political parties or candidates cannot run for office if they engage in incitement to racism. Opposition parties welcomed the decision.

Polls suggest that Otzma Yehudit is currently winning 2.8-2.9 per cent of the vote. While short of the 3.25 percent threshold, the party has been climbing in the polls. Were it to clear it, its MKs could bolster Netanyahu’s right-wing bloc. In the meantime, Netanyahu is reportedly dangling the prospect of cutting the threshold for the next elections if Otzma Yehudit pulls out of these elections.

Rather more conventionally, the main parties have also been concluding vote-sharing agreements. These allow parties to pool surplus votes – that is, those which don’t contribute to the election of Knesset members. They generally allow bigger parties to scoop up “extra” voters from smaller ones, potentially adding crucial Knesset seats to their overall tallies. Likud and Yamina have now reached such agreements, as have Labor and the Democratic Camp.

Rather more eyebrows were raised, however, over Liberman’s decision to come to a vote-sharing deal with Gantz. In April, Yisrael Beitenu and Shaked’s New Right signed an agreement. The latest move provoked anger from Netanyahu who accused Liberman of “moving votes from the right to the left”.  While Liberman insisted the deal was “merely technical”, few are convinced. “The agreement is not technical,” wrote commentator Anshel Pfeffer. “The sharing of surplus votes will probably work to Blue and White’s advantage, because Israel’s system of proportional representation tends to favour the larger party. It is also a clear statement of intent to cooperate after the election in coalition.”

One agreement that appears far less likely to be secured, however, is the tentative offer to enter a Gantz-led coalition made by the head of the Joint List, Ayman Odeh. While heavily conditioned, it would mark the first time in the country’s history that the Arab parties have been willing to serve in an Israeli government. Blue and White rejected the proposal, pointing to the presence of the hardline anti-Zionist Balad party within the Joint List. Blue and White co-chair Yair Lapid said: “Ayman Odeh can’t say ‘we will sit with them [Blue and White] in the government’ and then join forces with Balad, which is a gang of Israel-haters who don’t recognise the Jewish state.”

However, while the Arab parties have never sat in government, they have provided the votes to secure the survival of minority governments, such as Yitzhak Rabin’s Labor administration in the early 1990s.

While Netanyahu continued to lead Gantz as Israelis’ preferred prime minister, there remains all to play for with nearly one-fifth of voters suggesting they don’t know who would make the better premier. Netanyahu has repeatedly ruled out a post-election Likud coalition government with Blue and White – knowing full well that the price of that would be his own job and the potential protection it provides him as he fights corruption charges.

Right-wing voters are, though, less hostile, with 42 percent telling pollsters last month that they favoured a unity government which brings Likud and Blue and White together. A stalemate in two week’s time might be broken only at the price of Netanyahu’s head.