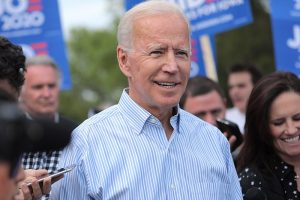 Both Donald Trump and his supporters have repeatedly attempted to paint the Democratic party as anti-Israel and suggested that the election of Joe Biden would be detrimental to the Jewish state.

This weekend, David Friedman, the US ambassador to Israel, went further and suggested that a victory for the former vice-president next month would destabilise the Middle East. Referring to Biden’s pledge to attempt to revive the 2015 Iran nuclear deal, he argued: “If Biden wins, we will see a policy shift that in my personal opinion will be wrong and will be bad for the region, including for Israel, Saudi Arabia, the United Arab Emirates, Bahrain, Qatar and Kuwait.”

In reality, Biden has a staunchly pro-Israel record which he has never shied away from. “Joe Biden’s stalwart support for Israel and his commitment to protect Israel’s security and strengthen our two nations’ partnership is deeply personal and spans his entire career,” proclaims his campaign website. “Since his first trip to Israel in 1973 shortly before the Yom Kippur War, Biden’s commitment to Israel’s security has been unshakeable.”

Biden has won strong support from pro-Israel figures and groups within the Democratic party. This week the Democratic Majority for Israel began running adverts in Florida and other critical battleground states supporting Biden.

So what should Israel and its supporters expect from a Biden presidency? A clear priority for Biden will be to put support for Israel back on to a bipartisan footing. Trump himself has been clear that he views his policies in the Middle East strictly through a partisan lens. On the campaign trail in Wisconsin in August, for instance, the president said that his decision in 2017 to move the US Embassy from Tel Aviv to Jerusalem was done with the aim of pleasing his evangelical base. “We moved the capital of Israel to Jerusalem [sic]. That’s for the evangelicals,” he bluntly stated. “You know, it’s amazing with that –the evangelicals are more excited by that than Jewish people.”

Trump also couched the recent normalisation agreement between Israel and the United Arab Emirates in similar terms. “It’s an incredible thing for Israel, [and] it’s incredible for the evangelicals, by the way,” the president said. “The evangelicals love Israel. Love Israel.”

It’s not the first time that Trump has suggested that his approach towards Israel is driven chiefly by political concerns and that American Jews – who traditionally vote overwhelmingly for the Democrats and are expected to do so once again in November – aren’t sufficiently grateful to him. Last August, he notoriously claimed: “I think any Jewish people that vote for a Democrat – it either shows total lack of knowledge or great disloyalty.” That comment reflected both Trump’s transactional view of politics and his deployment of antisemitic tropes, as well as his determination to present the Democrats as anti-Israel.

By contrast, Biden pledges to “ensure that support for the US-Israel alliance remains bipartisan, reversing Trump’s exploitation of US support for Israel as a political football, which harms both countries’ interests”.

Biden has also said that, as president, he will sustain America’s “unbreakable commitment to Israel’s security” and cites his role in the Obama administration’s huge $38bn 10-year military aid package to Israel – the largest in US history – which was signed between the two countries in 2016.

Moreover, throughout the primary season – when he frequently came under attack from the left – Biden made clear that he wouldn’t support conditioning or withholding security assistance to Israel. As he argued in a TV interview last November: “I strongly oppose Israel’s settlement policy on the West Bank. I have made that clear to Bibi when … I was vice president. I have made it crystal clear to the Israelis. But the idea that we would cut off military aid to an ally, our only true, true ally in the entire region, is absolutely preposterous. It’s just beyond my comprehension anyone would do that.” The former vice-president repeated that pledge earlier this summer, stating: “I’m not going to place conditions for the security assistance given the serious threats that Israel is facing.”

Biden is equally unequivocal in his opposition to the BDS movement. His campaign website pledges that, as president, Biden will “firmly reject the BDS movement – which singles out Israel and too often veers into anti-Semitism – and fight other efforts to delegitimise Israel on the global stage”.

Having already conceded much on domestic policy to supporters of his former rival for the Democrat nomination, Bernie Sanders, Biden in July refused to agree to a tougher approach towards Israel in his party’s platform. As Peter Mulrean, who served for three decades in the State Department and subsequently oversaw UN aid programmes for Palestinians, argued: “The party platform section on Israel and Palestine is a clear victory for those supporting a return to mainstream Democratic policies of the past and a loss for the progressives seeking more restrictive or conditional support for Israel.”

Biden’s commitment to its security and opposition to BDS is rooted in his long-standing view of Israel as the ultimate safeguard of the security of the Jewish people, as former Democrat congressman Steve Israel has described: “Biden would often tell me how his support for Israel was formed. He was a young kid sitting at the dinner table. It was around the time of the debate on the establishment of the modern state of Israel. His father was unable to comprehend how anyone could oppose this historic step. To this Irish American Catholic salesman, it was obvious why Israel had to exist. The establishment of a state for the Jewish people was the only way to fulfil the promise of ‘never again’ after the tragedy of the Holocaust. It was the first time Biden ever heard that phrase, and he never forgot the lesson.”

Decades later, in his final address to AIPAC as vice-president in 2016, Biden echoed the lessons he learned as a child. “When swastikas are painted on synagogues, when Jewish people are targeted in terrorist attacks, when thousands of European Jews immigrate to Israel out of fear when a seemingly organised effort to discredit, delegitimise and isolate Israel persists on the international stage, it’s dangerous, it’s wrong and every time we encounter it, we have an obligation to speak out against it.”

Biden has framed his support for a two-state solution in terms of the responsibilities and behaviour he expects from both the Israeli government and the Palestinian leadership, with his campaign pledging to “work with the Israeli and Palestinian leadership to support peacebuilding efforts in the region”. Biden, it says, “will urge Israel’s government and the Palestinian Authority to take steps to keep the prospect of a negotiated two-state outcome alive and avoid actions, such as unilateral annexation of territory and settlement activity, or support for incitement and violence, that undercut prospects for peace between the parties.”

Indeed, Biden’s vocal and consistent opposition to annexation, commentators suggest, may have played a part in Benjamin Netanyahu’s u-turn on the issue in the summer. “Had Netanyahu moved to annex parts of the West Bank in the coming months,” wrote Shibley Telhami of the Brookings Institute, “his government would have started its relationship with a possible new Democratic administration on the wrong foot, even as the Biden-Harris ticket seems palatable to Israel on issues pertaining to Israel-Palestine.”

Biden – who had previously urged Arab states to “move beyond quiet talks and take bolder steps towards normalisation with Israel” – has also supported the historic recent steps taken by the UAE and Bahrain. “I think Trump is going to accidentally do something positive here, in terms of this issue of … other Arab states,” he said last month.

But Biden has precious little else positive to say about the Trump administration’s policies with regard to the Israeli-Palestinian conflict or the wider Middle East. He dismissed the long-delayed Trump peace plan when it was launched in January, saying: “A peace plan requires two sides to come together. This is a political stunt that could spark unilateral moves to annex territory and set back peace even more. I’ve spent a lifetime working to advance the security [and] survival of a Jewish and democratic Israel. This is not the way.”

Biden has thus promised to “reengage the Palestinians”, saying he will “reverse the Trump Administration’s destructive cut-off of diplomatic ties with the Palestinian Authority and cancellation of assistance programs that support Israeli-Palestinian security cooperation, economic development, and humanitarian aid for the Palestinian people in the West Bank and Gaza”.

At the same time, as his comments regarding its “support for incitement and violence” show, Biden will also hold the Palestinian leadership to account for its failings. He has, for instance, vowed that any financial assistance to it will have to comply with the requirements of the 2018 Taylor Force Act, including its requirement that the PA end its policy of paying salaries to imprisoned Palestinian terrorists and their families. “The Palestinians need to end incitement in the West Bank and rocket attacks in Gaza,” Biden said in May. “What they are teaching in their schools is still in the school books. No matter what legitimate disagreement they may have with Israel, it’s never a justification for terrorism, and no leader should fail to condemn as terrorists those who commit these brutalities.”

The former vice-president has also accused the Palestinian president, Mahmoud Abbas, of having “not stepped up when given opportunities” and also argued that the PA should “acknowledge, flat-out, Israel’s right to exist – period – as an independent Jewish state and guarantee the borders”.

As well as making an explicit link between Israel’s security and his support for a two-state solution, Biden has also framed his desire for the US to rejoin the 2015 Joint Comprehensive Plan of Action in similar terms. “Trump has put Israel in danger by tearing up the Iran nuclear deal, and replaced it with nothing,” Biden said last month. “Iran is closer to a [nuclear] weapon than when we left office in 2017,” he suggested. “And instead of Iran being isolated, we are the ones being isolated.”

But while Biden has said he will rejoin the JCPOA if Iran returns to compliance with it, he also wants to make the deal “longer and stronger”, so that it also encompasses “Iran’s other destabilising actions” in the region, which were not covered by the original agreement.

Whatever Trump and his allies may claim, Israel’s security – and the stability of the Middle East – will surely be safe in Biden’s hands. As the late Shimon Peres, Israel’s former president and great statesman, once put it, the former vice-president is “a stoic friend, a man with profound judgement”.