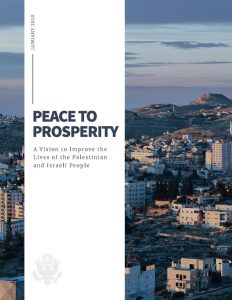 The first part of Donald Trump’s much-delayed plan to secure “the ultimate deal” – peace between Israel and the Palestinians – was published on Saturday.

The document, entitled Peace To Prosperity, outlines a $50bn investment plan ahead of an “economic workshop” in Bahrain this week.

The Palestinian Authority, which is boycotting the summit, immediately rejected the US proposals. Israel has said it will study them.

The plan’s author, the president’s son-in-law and special adviser, Jared Kushner (pictured), labelled it “the opportunity of the century” for the Palestinians. In a statement issued by the White House he suggested: “For too long the Palestinian people have been trapped in inefficient frameworks of the past. The Peace to Prosperity plan is a framework for a brighter, more prosperous future for the Palestinian people and the region and a vision of what is possible if there is peace.”

The document focuses on three “distinct pillars of the Palestinian society: the economy, the people and the government” and says its proposals have the potential to “open a new chapter in Palestinian history – one defined, not by adversity and loss, but by freedom and dignity”.

In reality, however, the economic plan is not as ground-breaking as Kushner suggests. Moreover, the failure to marry it with a political plan and the contradictions between its proposals and the actions of the Trump administration suggests it is of limited value.

At its core, Peace to Prosperity envisages a 10-year $50bn package of investment in the West Bank, Gaza, Egypt, Lebanon and Jordan. The bulk of the money – some £28bn in all – is earmarked for the Palestinian territories with Egypt receiving £9bn, Jordan $7bn and Lebanon $6.3bn for cross-border projects.

Despite the PA boycott of the Trump administration – triggered by its decision to recognise Jerusalem as the capital of Israel in December 2017 – commentators have suggested that a number of the 175 projects which are outlined in a 96-page annex to the main plan hint at “substantial concessions” that the US will expect from Israel.

The most ambitious proposal envisaged in the economic plan is a “transportation corridor directly connecting the West Bank and Gaza through a major road and, potentially, a modern rail line”. As Ron Kampeas of the Jewish Telegraph Agency noted, this project was chief among the “security compromises” Israeli prime minister Benjamin Netanyahu “might be loath to make”.

“A similar proposal was raised during the Oslo process in the late 1990s; Israeli officials at the time fretted that any system that transported Palestinians from Gaza to the West Bank across Israeli territory posed a massive security risk,” Kampeas argued.

Likewise, Kushner’s plan calls for “steps to improve Palestinian cooperation with Egypt, Israel, and Jordan, with the goal of reducing regulatory barriers to the movement of Palestinian goods and people”. Such a step might involve lifting the tight restrictions imposed by Israel and Egypt on movement in and out of Gaza following Hamas’ coup in the coastal enclave 12 years ago.

These examples point to three major flaws with the economic plan.

First, as the “transportation corridor” through Israel illustrates there is little new thinking in the plan. As President Obama’s former ambassador to Israel, Dan Shapiro, commented: “There are plenty of good ideas in the economic plan — projects for housing, employment, infrastructure, private sector development, and so on. None of them are new. They have been proposed in previous economic plans.”

Second, it is impossible to divorce the Trump administration’s economic aspirations from the political realities.

As Raphael Ahren, diplomatic correspondent of The Times of Israel suggested: “The plan notably steers clear of terms such as Palestine, statehood, two-state solution, Jewish state, settlements, occupation or annexation. It mentions Israel only six times, and only in the context of countries neighbouring the ‘West Bank and Gaza’; the text avoids using the term ‘the Palestinian territories’ and also does not mention Areas A, B, and C in which the West Bank is currently divided, in accordance with the Oslo Accords.”

The US reportedly intends to detail proposals dealing with the thorniest political issues involved in the conflict – including borders, security, settlements, refugees and the status of Jerusalem – after a new Israeli government is in place in the autumn. However, the feasibility of these US proposals is open to question. Kushner suggested this week that the US would not follow the lines of the 2002 Arab Peace Initiative. That Saudi-led proposal called for full normalisation with Israel across the Arab world in exchange for a Palestinian state on the whole of the West Bank and Gaza — with agreed upon land swaps — and East Jerusalem as its capital. Netanyahu has previously indicated that, while being unwilling to accept the plan in full (Israel has, for instance, no intention of handing the Golan Heights back to the Assad regime), the proposals offered a reasonable starting point for talks.

However, without progress on key political questions, it is difficult to see how the economic proposals can be advanced. Dennis Ross, who advised the Clinton and Obama administrations on Middle East issues, thus argued: “It is as if the plan is about laying out a vision and showing how good life could be if the political problems were resolved. That is true, but it is not likely to make the political problems disappear. Take one example: all the development in Gaza is necessary, but Hamas is there so how is that to be handled. And, all this takes money but who is going to provide it — and will they provide if they think there is no political resolution?”

Another veteran of US peace initiatives, Martin Indyk, was even more dismissive of the administration’s plan. “Kushner’s ‘Peace to Prosperity’ plan paints a detailed and compelling vision of what life could be like for Palestinians once there’s peace,” he suggested. “Unfortunately, it’s a fantasy. None of the conditions necessary to achieve Kushner’s vision currently exists and nowhere in the plan is there any indication of how those impediments would be removed.”

Despite agreeing on little else, both the Israelis and Palestinians have also suggested that attempting to separate the economic from the politics is a flawed approach. President Mahmoud Abbas said on Sunday that “The workshop was meant to address the economic problems, but the real problem is the political one.” Similarly, Netanyahu emphasised that, in Israel’s eyes, “peace is coupled and dependent on security.”

Finally, it escaped the attention of few of those involved in peace-building work that Kushner’s plan heavily promotes civic society programmes, formerly supported by the US government, for which the Trump administration slashed funding. The US cuts are part of an effort by the president to punish Ramallah for refusing to engage with his administration. The affected programmes include the Parents Circle, a coexistence group which brings together the families of individuals killed in the conflict to promote peace and reconciliation. As Shapiro suggested: “The US had aid programmes to support all [the plan’s] goals, but the Trump administration cancelled them … and fired dozens of expert staff needed to implement them. Now we are asking others to invest where we have divested. What do we think the response will be?” LFI has repeatedly raised the issue of the US cuts, calling for the UK government to step in and help fill the resulting funding gap.

Despite Trump and Kushner’s boasts, the economic workshop underlines just how far the US is from being in a position to broker any form of deal. There is no official Israeli or Palestinian presence in Bahrain; the PA’s decision to boycott the event led Arab states to baulk at the prospect of participating in an event with representatives of the Israeli government. As one prominent Palestinian businessman, who turned down an invite to the conference, suggested of the lack of Israeli and Palestinian participants: “It’s like going to the wedding and the bride and groom aren’t there.”

Egypt and Jordan, the only two Arab nations with peace treaties with Israel, are sending only mid-level officials. Lebanon, an intended beneficiary of the economic plan, decided to boycott it. Even Saudi Arabia and the UAE, who have engaged with the US’ proposals, have given no indication of how much they might be willing to pay towards underwriting Kushner’s plans. Moreover, all the Arab states who are participating have made clear that they will not support a peace deal that the Palestinians will not accept.

Even if the US publishes its political proposals in the autumn, they are unlikely to go far: the US election timetable alone guarantees that. Perhaps the only chance for Trump’s ultimate deal will come if the president is re-elected next November. As Anshel Pfeffer of Haaretz argued this week: “The first thing Trump needs to get his plan on the table, is to win a second term. Facing four more years of Trump could make the Palestinian leadership reconsider its boycott.” And, then, of course, the Israelis and Palestinians can begin to wrestle with the issues which even more engaged, trusted and experienced US administrations have failed to persuade and encourage them to resolve.