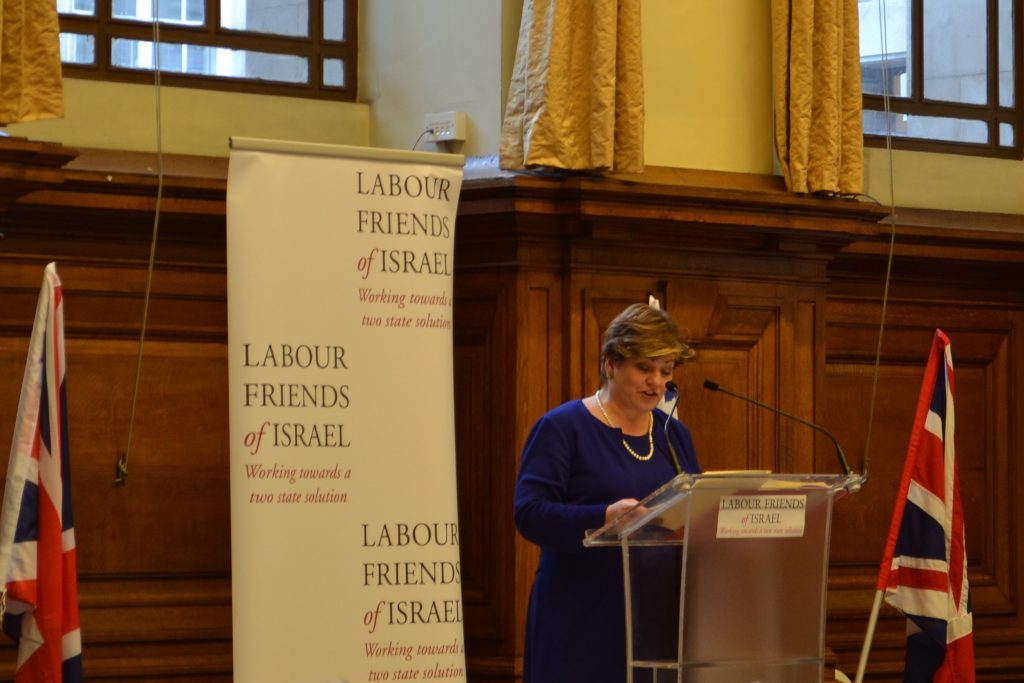 The next Labour government will challenge antisemitic incitement by the Palestinian Authority, support the establishment of an International Fund for Israeli-Palestinian Peace and continue to oppose the BDS movement, the shadow foreign secretary, Emily Thornberry, told this week’s annual LFI lunch.

Ms Thornberry also repeated Labour’s pledge to recognise a Palestinian state and made clear it would challenge settlement-building in the West Bank.

The lunch – which was attended by 300 people, including Chief Rabbi Ephraim Mirvis; Israel’s ambassador to Britain, Mark Regev; 70 Labour MPs; and representatives of Jewish communal organisations – also heard a strong call from LFI chair Joan Ryan for Labour to drive “the scourge of antisemitic anti-Zionism” from the party.

“Peace can only be built by showing people what they have in common, not by reinforcing what divides them. It is why we will make clear to the Palestinian Authority that officially sanctioned antisemitic incitement, and the glorification of suicide bombers, particularly to children and young people, must come to an end,” the shadow foreign secretary said. “Because peace can only be built by teaching children on all sides not to hate, but to love.”

Ms Thornberry congratulated LFI on its campaign – For Israel, For Palestine, For Peace – which this year succeeded in winning a government commitment to spend £3m a year over the next three years. She also backed our campaign to establish an International Fund for Israeli-Palestinian Peace. Pledging to put “peacemakers and peacebuilders at the heart of our approach”, the shadow foreign secretary said she was “proud to support LFI’s campaign in favour of an International Fund for Israeli Palestinian Peace” and vowed to “continue to champion that work when we are in government”.

During her 15-minute address Ms Thornberry suggested that the BDS movement is driven by “bigotry”, arguing that opposition to the policies of an individual Israeli government can never “justify a hatred of the nation and its people, or a boycott of its products, its culture or its academics, or a denial of its right to defend itself from military assault and terror attacks”. “That sort of bigotry against the Israeli nation has never been justified and it never will be,” she said.

“We will recognise the State of Palestine, because it is in the interests of Israel, the Palestinians and peace,” the shadow foreign secretary argued. “But recognition of a Palestinian state is just a starting point. The next Labour government will be strong advocates of a two-state solution: one that brings the people of Israel lasting security and peace, and protects them both from domestic terror and external aggression; and one that brings the people of Palestine a viable, democratic and prosperous state.”

Committing Labour to support the Arab Peace Initiative – which Israel has made increasingly positive reference towards – Ms Thornberry said the party would oppose the expansion of settlements in the West Bank and “work for a solution to the tragic plight of Gaza – one that seeks both to end the blockade, while also protecting the people of Israel from Hamas rocket attacks”.

Referencing her recent visit to Israel with LFI, Ms Thornberry argued: “That visit confirmed to me what a long way there is to go before Israeli citizens can feel safe in their homes and on their streets, or before Israel can feel safe at its borders. None of it was unfamiliar to me – the random stabbings and indiscriminate car rammings, the tunnels and rocket attacks – but I do think that if more people in Britain understood what it is like for ordinary Israelis to live with that constant undercurrent of fear, there would be better understanding of why the security situation is so fundamental to any progress.”

Ms Thornberry also addressed the issue of antisemitism in the Labour party. “There can be no place in our party for anyone who holds antisemitic views or who denies the right of Israel to exist, and any people who hold those views must and will be drummed out of our party.”

In her speech, Ms Ryan said she was “ashamed – and we should all be ashamed – of some of the language we have seen used by members of the Labour Party when discussing Israel… age-old tropes about international conspiracies and Jewish power, the suggestion that Jews are manipulating allegations of antisemitism for their own ends, and, most pernicious of all, the attempt to link Zionism and Nazi Germany”.

She also described the “grotesque spectacle of a speaker at a fringe meeting at Labour Party conference – a fringe meeting that was in the official conference guide – asking the question: ‘Holocaust: yes or no’; leaflets being distributed to delegates quoting the words of Reinhard Heydrich, the architect of the Final Solution, and some supporters of the current leadership taking to the airwaves and refusing to condemn Holocaust denial”.

She added: “Our party does not have a problem with ‘all forms of racism’. It has a problem with antisemitism. And we will never be able to confront it until we acknowledge that fact.

“This is not a peripheral issue. It warps the important debate about how a future Labour government can help bring about an end to the tragic conflict between Israel and the Palestinians. It sullies our party’s reputation and betrays its history.

“It strikes at the very core of what our movement is about and should offend the conscience of every Labour party supporter, member and elected official.”

Concluding her speech, Ms Ryan said: “Our party – from its leadership to its grassroots – needs to address this problem decisively and urgently.

“We must acknowledge and apologise for the fact that we have fallen far short of the standards that should be expected from a party that aspires to lead this country.

“We must agree and enforce clear red lines about where legitimate criticism of the Israeli government morphs into anti-Semitic anti-Zionism. We must reject the fiction that prefacing a statement with the insulting words ‘I accept Israel’s right to exist’ makes anything and everything that follows somehow acceptable.

“We must steadfastly oppose the BDS movement, which exists solely to demonise and delegitimise the world’s only Jewish state.

“And we need this battle to be led by the leader of the Labour party.”

In the month which saw celebrations for the 100th anniversary of the Balfour Declaration, like Ms Thornberry and Ms Ryan, Mr Regev referenced the close historic ties between Labour and the Jewish state.

“It was the British Labour Movement who called for the fledgling Jewish state to be recognised by the United Kingdom,” the ambassador remarked. “And I have with me here today a copy of one such motion, from the Manchester section of the constructional engineering union, today better known as Unite.”