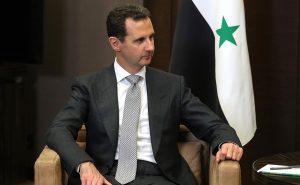 Bashar al-Assad’s international isolation appears to be coming to an end as Arab capitals make moves to bring the Syrian dictator in from the diplomatic cold.

Political, strategic and economic imperatives have caused governments in the region – including some which previously aided the rebels attempting to overthrow the Assad regime – to begin reaching out to Damascus in recent weeks and months.

The Arab League suspended Syria’s membership of the body 10 years ago in response to Assad’s violent crackdown on protesters, calling on Arab ambassadors to leave the country. While some countries – such as Jordan and, under president Sissi, Egypt – maintained low-level contacts with the Syrian regime, others – such as Saudi Arabia, the UAE and Qatar – backed rebel forces. Assad, with the help of Vladimir Putin and Iran, waged a bloody civil war in which at least 350,000 people are believed to have died with many more being displaced from their homes as poverty rates hit 80 percent. But, as he has regained control over much of Syria’s territory during the last five years, some Arab states have begun to adopt a new tack. The UAE and Bahrain reopened their embassies in Syria in 2018, Jordan returned a senior diplomat to the country in 2019 and Oman sent its ambassador back to Damascus last year.

Egypt has been at the forefront of efforts to assist Syria’s rehabilitation. As Caroline Rose, senior analyst at the Washington-based Newlines Institute for Strategy and Policy, told the Al-Monitor website, the meeting between the Egyptian and Syrian foreign ministers “indicates Egypt’s aim of incremental normalisation with the Assad regime”. She termed it “an opportunity for Egypt to test the waters, identify spaces for political and economic cooperation, and gauge attitudes toward this process among its Middle Eastern allies”.

Arab governments are acting for a complex mix of political, strategic and economic objectives:

However, the primary driver of the new approach towards Assad is that the region has “given up on the U.S. having a more forceful posture against the regime,” says Charles Lister, director of the Middle East Institute’s Syria programme. The US’ gradual withdrawal from the region over the past decade – graphically illustrated by Washington’s chaotic abandonment of Afghanistan – has simply reinforced this perception. The Biden administration rejects the notion that there has been any shift in US policy towards Syria. “What we have not done and will not do is express any support for efforts to normalise or rehabilitate the brutal dictator Bashar al-Assad, lift a single sanction on Syria, or change our position to oppose the reconstruction of Syria until there is irreversible progress towards a political solution,” the State Department told Reuters earlier this month. However, Biden has made sparing use of the new Caesar Act – passed by the US Congress in 2019 to further tighten sanctions on Syria – and appears to be adopting a pragmatic stance towards its regional allies’ approach towards Assad. There is no sign, for instance, that Jordan will pay a price for its recent actions, despite the tough US sanctions regime against Syria. As Aaron Stein, director of research at Foreign Policy Research Institute, notes, the Biden administration “isn’t interested in expending diplomatic capital to prevent regional governments from doing what they think is best vis-a-vis the regime”. The signals emitted by Washington are likely to be closely watched by the Saudis, who have been slower to reach out to Assad (although Riyadh sent its spy chief to Damascus for talks last year). Of the Lebanon gas deal, which Assad leapt at, one European diplomat despairingly told The Observer last month: “At the very least, the two economic crises [Lebanon and Syria] are now integrated. So much for sovereign solutions. Does the US truly understand what it has done here? All these years of talk about state-building. And then at the end, you hand the mess back to Bashar who played a lead role in killing both countries.”

…and quiet words behind the scene

But while Biden may be publicly taking a less hardline view than his predecessor, senior administration officials have made clear that – behind the scenes – they’re keeping the pressure on allies. While allowing the gas deal in order to assist Lebanon, and also giving the green light to some kinds of aid inside Syria, the US is also trying to minimise any benefits flowing to the Assad regime. “We are actively telling the UAE and Saudi Arabia, ‘Don’t go building shopping malls. Don’t unfreeze Bashar’s assets. Don’t give the government in Syria access to any kind of revenue for rebuilding or reconstruction,’” one official told The New York Times.

Observers of Syria are gloomy as to the likely impact of rapprochement with Assad. Malik al-Abdeh, who is close to the opposition, says: “What the regime is desperate to achieve is to end the US and EU sanctions and restore diplomatic relations with Arab countries and the West. King Abdullah appears to be putting these on the table and saying ‘let’s give these to Assad in return for limited behavioural change’. Assad will not engage in a transactional relationship as described in the paper. Instead, he will likely exploit the channels extended to him to undermine whatever leverage the West/Arab states have.”