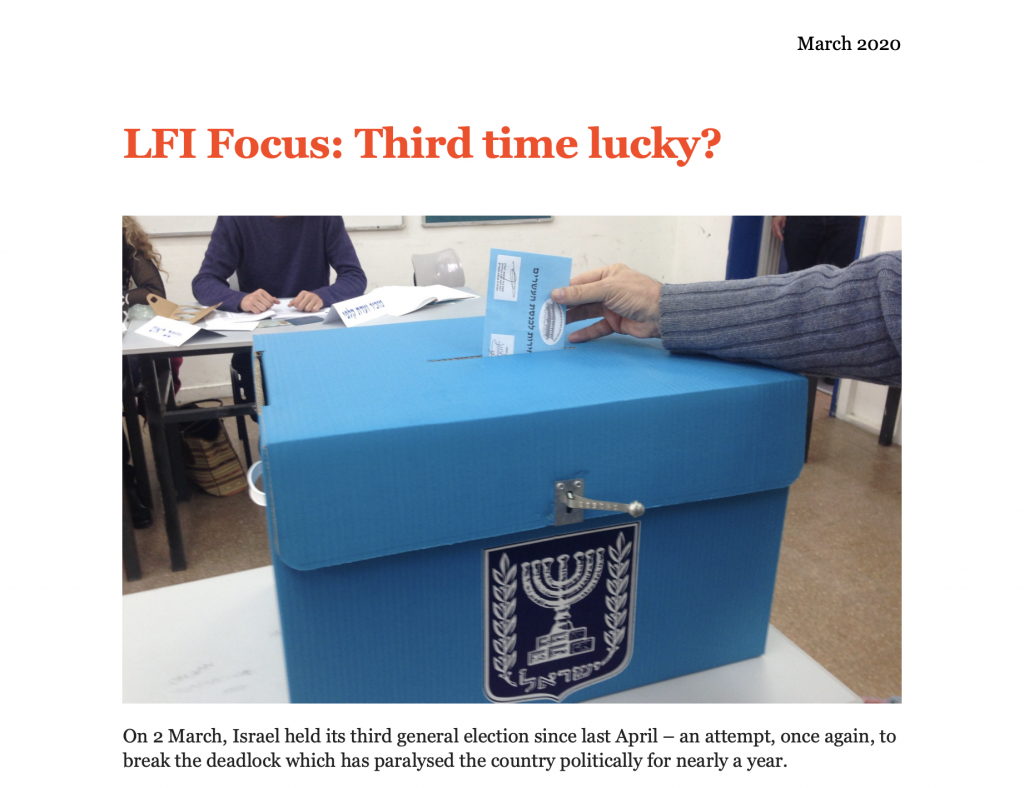 For once, the polls were right. They had suggested for months that Israel’s general election yesterday would end in stalemate. While counting is not yet complete, exit polls and the current official tallies point to the same deadlock which followed April’s inconclusive general election.

The results represent a massive blow to Benjamin Netanyahu, who earlier this summer became the Jewish state’s longest-serving prime minister. His right-wing bloc has now twice failed to garner the 61 seats in the Knesset required to form a government.

The results were also a rebuff for those who predicted that turnout would fall thanks to voter fatigue. Instead, it rose marginally to 69.4 percent, up from 67.9 percent five months ago.

As in April, the centrist Blue and White alliance appears to have fought Likud to a virtual draw, with current results show it narrowly ahead by 32 to 31 seats.

Blue and White leader Benny Gantz (pictured) will be able to count on the support of the left-wing Democratic Camp, which won five seats, and Labor, which won six. The Joint List of Arab parties, which won 12 seats, making it the third largest group in the Knesset, has also hinted it will back Gantz, giving the centre-left bloc 56 seats.

The far-right Otzma Yehudit polled only 1.87 percent of the vote, falling considerably short of the 3.25 percent threshold required to enter the Knesset.

The results leave the hawkish former defence minister Avigdor Liberman as kingmaker. His Yisrael Beitenu party was, alongside the Joint List, the big winner of the night – adding four seats to the five it won in April.

It was Liberman’s failure to back Netanyahu after April’s poll which caused the unprecedented second election of the year. Liberman, who draws his support from Russian immigrants to Israel, is fiercely secular. In the wake of the spring’s general election, he refused to back the demand of Netanyahu’s ultra-Orthodox allies to water down a bill which would tighten the exemption of Haredi young men from performing national service. Without the support of both Liberman and the ultra-Orthodox parties, Netanyahu didn’t have the numbers to form a government.

If anything, Liberman has subsequently hardened his stance. During the campaign he repeatedly assailed Likud’s reliance on the ultra-Orthodox parties, attacked “religious coercion” and called for a “national-liberal” unity government encompassing Likud, Blue and White and his own party, but excluding Shas and UTJ. His stance appears to have reaped rich political dividends, allowing him to successfully peel moderate right-wing voters away from the prime minister.

However, while Liberman repeated his calls for a secular unity government in the early hours of this morning, such an arrangement faces a huge obstacle; namely, Gantz’s repeated refusal to serve in a coalition with Netanyahu while the prime minister remains under the threat of indictment on multiple corruption charges. The prospect of formal charges being levied against Netanyahu is one that will be decided in the next month: the prime minister will appear in court on 2 October in a pre-indictment hearing.

Already, coalition-building and horse-trading are under way. Netanyahu called for the formation of a “strong Zionist government” rather than “a dangerous anti-Zionist government” – thus continuing to highlight the supposed danger posed by the Arab parties, as he has done throughout the campaign – and Likud officials are reported to have reached out to Labor. Its five seats would potentially enable Netanyahu to form a government without Liberman. However, Labor leader Amir Peretz immediately rejected the overtures, suggesting his priority was Netanyahu’s removal from office.

As David Horowitz, editor of the Times of Israel, suggested: “The Arab parties … appear to have done extraordinarily well. Netanyahu’s attempts through recent years to denounce the Arab electorate and its leadership, and to suppress the vote by deploying partisan observers with cameras at their polling stations, would appear to have backfired spectacularly.” Indeed, turnout among Arab-Israelis jumped from 50 percent in April to 60 percent.

Gantz announced he would aim to form a broad unity government and said he has already spoken to Democratic Camp leader Nitzan Horowitz, Peretz and Joint List leader Ayman Odeh.

Former Labor prime minister Ehud Barak – who helped to found the Democratic Camp – called upon Gantz to lead a temporary unity government, comprising his party, Labor and Yisrael Beytenu, with support from the Joint List from the opposition. He said this arrangement would last until the end of Netanyahu’s legal proceedings and then a further decision could be made as to whether Likud would be added into the government.

The Joint List has also laid out its demands for backing Gantz: the abolition of the Jewish Nation State Law, more building permits in Arab communities and a diplomatic plan for talks with the Palestinian Authority. While the Arab parties have never sat in government, they have on occasion – as in the 1990s under Yitzhak Rabin – provided a form of confidence and supply to Labor administrations.

A key player in the days ahead will be Israel’s president, Reuven Rivlin. He will formally meet each party and ask who they recommend should be prime minister. By next week Rivlin will ask the party leader with the best chance of building a 61-seat majority to form a government. That candidate will have 28 days (plus the option of a two-week extension) to form a coalition. If that candidate fails, the president is expected to demand they return that mandate to him so he can ask another party leader in order to avoid a repeat of what happened in April when Netanyahu initiated a vote to dissolve the Knesset.

As the Jewish Insider website noted, although the president is largely a figurehead, “with no candidate expected to receive more than 60 recommendations, Rivlin could play more than the usual ceremonial role”.

Depending on the final numbers, a number of potential coalition options now come into play.

Gantz could form a unity government with Likud if the party ditches Netanyahu or the former IDF general drops his insistence on not serving with the prime minister. Both scenarios would lead to cries of betrayal. Nonetheless, as the Jerusalem Post’s Lahav Harkov argued, while Likud does not tend to knife its leaders, “it’s not a party of lemmings, either. Its top MKs may not remain loyal to Netanyahu for long.” If a deal were stuck, the two parties would probably rotate the premiership, with Likud potentially having to pick a successor to its long-serving leader. Foreign minister Israel Katz, Knesset speaker Yuli Edelstein, public security minister Gilad Erdan and Netanyahu critic Gideon Sa’ar might all then be in the running to share the premiership with Gantz.

The two parties would also have to decide whether to bring other parties into the coalition. The ultra-Orthodox parties would make uncomfortable partners for both Liberman and Blue and White’s liberal co-leader Yair Lapid. Blue and White would also likely balk at sitting with Yamina, although it is now likely to split between the New Right’s Ayelet Shaked and Naftali Bennett and the more hardline National Union and Jewish Home parties. Blue and White might find it easier to work with the former if they were no longer tethered to the latter.

Were Liberman or the ultra-Orthodox parties to drop their position on the conscription bill, the path might be open for Netanyahu to form a new right-wing coalition government. However, it is hard to see – especially in the light of the pro-secular, anti-Orthodox campaign Yisrael Beitenu has waged – such a compromise being arrived at.

A centre-left government joined by Liberman and propped up by the Arab parties also seems difficult to envisage given the former defence minister’s hawkish positions. Many Arab politicians expressed disquiet when Odeh spoke of backing Gantz; they would resist strongly any arrangement that involves Liberman. He in turn said today that “not even in a parallel universe” would he go into government with the Joint List. Moreover, even if such a government were cobbled together, it would face enormous pressures if any conflict with Hamas surrounding Gaza were to occur, given the Arab parties’ sympathies for the Palestinians and Liberman’s own hardline stance.

Another centre-left permutation would be for the ultra-Orthodox parties, rather than Liberman, to form a coalition with Gantz. Such a scenario would have been commonplace not that many years ago when Haredi politicians – who are more concerned with their sectoral interests, often lean to the left on economic issues and are not ideologically opposed to territorial compromise with the Palestinians – served in the governments of Labor prime ministers. However, during the Netanyahu years, the Orthodox parties have become much closer to Likud, and UTJ has already insisted it will stick with the prime minister.

There is, of course, another possibility: that the deadlock cannot be broken and Israelis find themselves returning to the polls for the third time this year