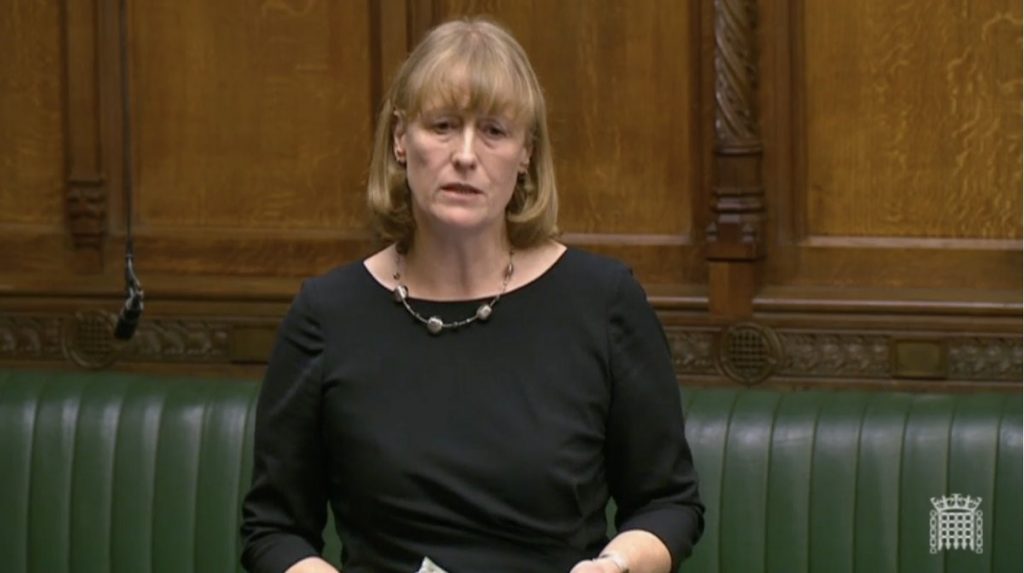 The campaign to persuade the government to proscribe Hezbollah in its entirety will continue, LFI chair Joan Ryan has pledged following last week’s debate in parliament.

At the end of the three-hour debate secured by Ms Ryan, Home Office minister Ben Wallace rejected calls from across the House to extend the UK’s ban on the terror group’s military wing to its so-called political wing. Many experts – and Hezbollah itself – dispute the notion that the two elements are distinct.

“It is deeply disappointing that the government has yet again refused to act decisively against Hezbollah. We will continue to campaign vigorously on this issue,” said Ms Ryan. “This antisemitic terror group, which seeks to destroy Israel and has wreaked death and destruction throughout the Middle East, should have no hiding place. Sadly, the UK continues to provide it with one.”

Ms Ryan’s motion won widespread support from Labour and Conservative MPs during the debate, as well as backing from the Democratic Unionist party. It was opposed by both the government and Labour frontbenches.

Opening the debate, LFI’s chair argued that, over the past three decades, Hezbollah has “been implicated in a string of deadly attacks against Israeli, Jewish and western targets both in the Middle East and beyond”.

Ms Ryan detailed Hezbollah’s “deep-seated, intractable and vicious hatred of Jews”, quoting one writer who has suggested that the group fuses “Arab nationalist-based anti-Zionism, anti-Jewish rhetoric from the Koran, and, most disturbingly, the antique antisemitic beliefs and conspiracy theories of European fascism”.

She also outlined Hezbollah’s long-standing desire to destroy Israel – its vehement opposition to the Oslo peace process and its effort to prevent any attempted normalisation of relations between Israel and Arab countries – as well as its pernicious influence in the wider Middle East.

“Its bloody fingerprints are all over the Syrian civil war, the most brutal conflict of this century,” Ms Ryan told MPs. “It has not only contributed to the killing fields of Aleppo and Homs, it has helped to eliminate the non-extremist opposition to Assad, thus contributing to the ranks of Sunni jihadis and stirring sectarian hatreds.”

Ms Ryan closed her speech by laying out the extensive evidence that the distinction between Hezbollah’s military and political wings is a false one and refuting the arguments of those who oppose total proscription. She dismissed the notion advanced by ministers that banning Hezbollah’s political wing might impede Britain’s ties with Lebanon, where the terror group exercises not just military but political power.

“Proscribing Hezbollah in its entirety does not appear to have hampered relations between Lebanon and any of the countries which have proscribed the terrorist group in its entirety,” argued Ms Ryan. The LFI chair also charged that the government “is simply not taking the threat posed by Hezbollah seriously”. “Only last week I was informed by the Home Office that it does not collect data on the numbers of Hezbollah members or supporters in the UK; a practice which is followed by other European countries, such as Germany.”

Mr Austin said Hezbollah had “carried out terrorist attacks and racist murders in the Middle East, in Europe and across the world. Its stated aim is the destruction of Israel but it does not limit its attacks to Israel; it targets Jewish people anywhere and everywhere”.

He argued that Hezbollah “is not interested in the compromises that all sides will need to make to bring about a two-state solution. Its sole interest is the destruction of Israel. Hezbollah has made that absolutely clear. It declared in 1992 that the war is on ‘until Israel ceases to exist and the last Jew in the world has been eliminated. Israel is completely evil and must be erased from the face of the Earth’

“That is why, when Israel unilaterally withdrew from southern Lebanon in 2000, Hezbollah’s response was not peace but the murder and kidnapping of Israeli soldiers and an avalanche of rocket attacks just six years later. It is why, today, Hezbollah, thanks to its Iranian paymasters, threatens Israel by pointing 120,000 to 140,000 rockets at the country.”

Mr Austin warned of the “carnage and the civilian deaths that could result when Hezbollah start raining down missiles” on Israel in any future conflict, citing recent analyses which suggest that the next conflict between Israel and the group will “will likely be the most destructive Arab-Israel war yet”.

Mr Austin also attacked Labour leader Jeremy Corbyn’s previous description of Hezbollah as “friends”. “Who would describe a racist, fascistic and terrorist organisation like Hezbollah as ‘friends’,” he asked.

“The conflict between Israelis and Palestinians is enormously difficult and complex,” Mr Austin concluded. “There are no easy answers. If there were, they would have been found by now. However, some elements are clearer than others, and the case of Hezbollah is one of them. This is an antisemitic, racist terror group—acting at the behest of Iran—which wishes to drive Jews from the Middle East and murder Jews around the world. Hezbollah is part of the problem; it will never be part of the solution.”

Ms Ellman focused on the fact that the failure to proscribe its political wing had allowed Hezbollah flags to be displayed on the streets of London at last June’s Al Quds Day parade.

“That message is clear, menacing and extremely powerful. The menacing chants at the march on the streets of London this year included the heinous cry: ‘Zionists/ISIS are the same. Only difference is the name’.

“All this is inciting violence, hatred and division on the streets of the UK. This is happening as antisemitic offences in this country reach record levels, as shown in the recent Community Security Trust report.”

Ms Ellman referenced her recent meeting with the Metropolitan police where she raised her concerns about the parade. “I asked the police why they were not taking any action against this incitement to hatred. It was clear from the discussions that ensued that a key factor in the police’s failure to act was that Hezbollah’s political wing is not illegal, and neither is displaying the flag.”

Sharon Hodgson, a fellow LFI vice-chair and the shadow minister for public health, listed examples of Hezbollah’s antisemitism. Noting that the debate was taking place on the afternoon parliamentarians mark Holocaust Memorial Day, she argued: “The theme of this year’s Holocaust Memorial Day is the power of words. The aim is to explore how language was used in the past and is used in the present. It reminds us never to be complacent. Right now, an organisation that calls for the annihilation of one of our allies and a whole ethnic population is lawfully allowed to be supported in this country, and last year, as we have heard, its flags were flown on the streets of our capital. Hatred should not go unchallenged, wherever it may raise its ugly head.”

Ms Ryan was also supported on the Labour benches by former defence minister and LFI vice-chair John Spellar who denounced Hezbollah as “one criminal entity” and former LFI chair John Woodcock who charged that the opposition and government frontbenches were “effectively in an alliance in refusing to recognise the bogus distinction between the so-called military wing and the rest”.

They were joined by LFI parliamentary supporter Mike Gapes, a member of the Foreign Affairs Select Committee, who referenced the carrying of Hezbollah flags in Al Quds Day parades in London last summer and demanded: “Terrorist activities should not be the only grounds for prosecution … There should be prosecutions for incitement to hatred, incitement to antisemitism and other crimes that are being committed on the streets of London.” LFI parliamentary supporter Graham Stringer meanwhile noted that “as well as being antisemitic, Hezbollah has assassinated and murdered Christians”.

Over 10,000 emails were sent to MPs in the run-up to the debate thanks to the efforts of our friends at the Israel Britain Alliance and We Believe In Israel.