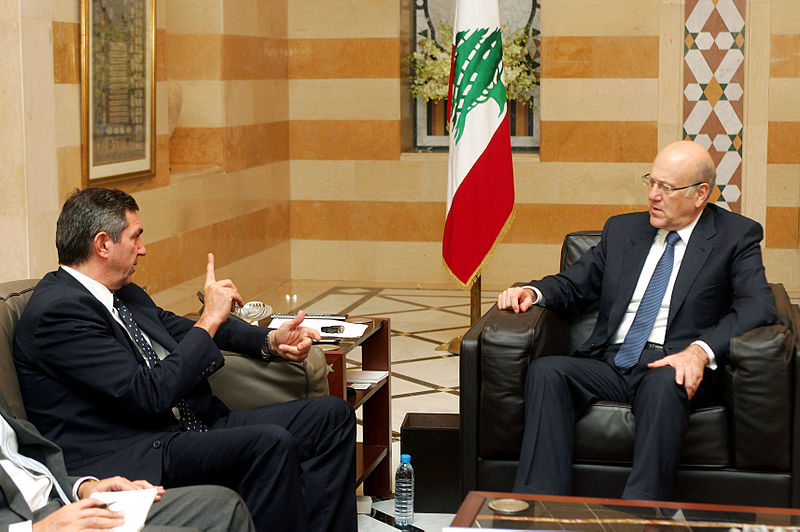 Lebanese parliamentarians met this week to formally confirm the country’s new government. The appointment earlier this month of telecoms billionaire Najib Mikati as prime minister ends a year-long political deadlock following the resignation of his predecessor in the wake of the deadly Beirut port explosion last August.

However, Mikati, who has twice served as prime minister previously, is widely seen as a member of the ruling elite which has led the country to the brink of economic disaster.

A respite from political paralysis

Mikati’s predecessor, Hassan Diab, resigned last August following an explosion at Beirut’s port which is estimated to have killed at least 218 people and which wrecked much of the city centre. But wrangling among Lebanese politicians left Diab remaining in place for more than a year at the head of a caretaker administration which was unable to begin addressing Lebanon’s deep economic crisis. Two efforts to form a new government – by diplomat Mustapha Adib and former prime minister Saad Hariri – ultimately collapsed; the impasse was the result of political jockeying ahead of elections next year and a byzantine system for apportioning ministries. In accordance with the rules governing the formation of Lebanese cabinets, half of the ministers are Christians and half are Muslims. Portfolios are allocated to ensure that the different sectarian factions are accommodated. The process of forming a government was further complicated by the fact that the international community is demanding far greater transparency and a clean-up of Lebanon’s notoriously corrupt system of governance – it is routinely listed as one of the most corrupt states in the world by Transparency International – before it helps bail the country out. The country’s political elite have found such a prospect distinctly uninviting and have shied away from forming a government committed to reform and fighting corruption. Indeed, Mikati himself was associated with corruption scandals during his previous terms in office. The new minister of finance, Youssef al-Khalil, is an official with the Central Bank, which is widely blamed for causing the crisis and is attempting to stifle International Monetary Fund requests for an audit of its books. The bank’s governor, Riad Salame, is under investigation in France and Switzerland for alleged money laundering.

Last August’s explosion at Beirut’s port was caused by a cache of 2,750 tonnes of ammonium nitrate which had been impounded in 2013 and improperly stored. As the New York Times recently suggested: “Many Lebanese saw the blast, and the efforts by powerful politicians to hobble the investigation into its causes, as the starkest example yet of the country’s deep dysfunction.” A committee established to investigate the causes of the explosion promised answers within five days. A year on, few have been forthcoming. A judge overseeing the investigation has been repeatedly obstructed with politicians blocking his requests to question former ministers and the head of Lebanon’s main intelligence agency. The judge’s predecessor was sacked earlier this year when he attempted to charge four officials with negligence.

The collapse of Lebanon’s economy over the past two years – the country defaulted on its debts in 2020 – has been brutal.

The economic crisis had been a long time coming. Weak and corrupt governments, a failure to undertake structural reforms, and an economy which has been keep afloat on a sea of mounting debt (Lebanon is the third most indebted state in the world) have, together, combined to unleash the current crisis, which was exacerbated by covid lockdowns. The unravelling began in autumn 2019 when the strategy deployed by Lebanon’s banks to bring in much-needed dollars – which has been compared to a state-sponsored Ponzi scheme – began to collapse. Lebanon’s central bank had encouraged wealthy investors to make large dollar deposits by offering ever-higher, unsustainable levels of interest. Paying those rates to depositors, however, required the bank to then offer even higher interest rates on new deposits. When the strategy was effectively rumbled in 2019, new deposits dried up, and the banks were left with less dollars than they had promised to pay in interest. Last year, Diab, the former prime minister, estimated there was a $83bn hole in the banks’ balance sheets.

Hezbollah to the rescue?

“There is little in Najib Mikati’s return to power as prime minister or the very familiar makeup of his new cabinet to inspire confidence,” suggested Hussein Ibish of the Arab Gulf States Institute. “For the IMF and the donor community to provide fresh funds, Lebanon will be required to make significant concessions on accountability and transparency, among other conditions … But it’s precisely these kinds of concessions the political leaders don’t want to make, not only because that means a certain loss of power and privilege, but because it will require them to agree on uncomfortable basic facts. For example, how much money was pilfered — and by who — and how the refinancing burden should be shared.”