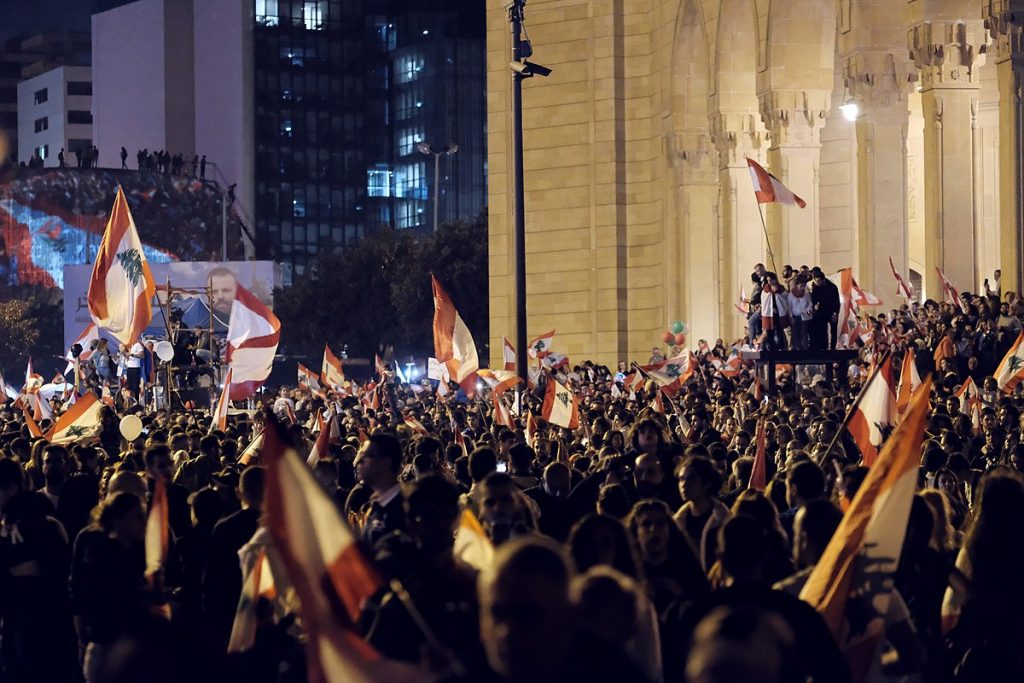 Lebanon is facing an unprecedented economic crisis, spurring protests and a threat to the country’s stability unlike any seen since the end of the country’s bloody civil war three decades ago.

The crisis – which was ignited last October by planned tax rises and grew into a wider movement against political corruption and the meddling of Iran in the country’s internal affairs – has also led to a focus on one of Lebanon’s most powerful forces, Hezbollah.

The coronavirus lockdown imposed in mid-March provided the government with a temporary reprieve from the protests which rocked the country last autumn and led to the resignation of prime minister Saad Hariri and his government.

However, the lockdown has worsened Lebanon’s economic plight – threatening to impoverish the middle class and worsen the already dire plight of the poor – and the easing of measures has seen protesters back on the streets.

Lebanon was in the midst of a full-pledged economic crisis when the lockdown began. On 7 March, the heavily indebted country defaulted on its loans, and last month the government of new prime minister Hassan Diab requested a loan from the IMF.

But the pandemic lockdown has, in the words of The Economist magazine, “pushed the economy into free fall”.

Economic statistics make grim reading. Unemployment has now hit 40 percent, while the inflation rate, which was a mere five percent last year, has surged to 50-60 percent.

“We have an economic recession that was coupled with hyper inflation,” Jad Chaaban, an economics professor at the American University of Beirut, has suggested.

For many Lebanese, the impact of this economic double-whammy has been devastating. The price of sugar has risen by 67 percent and wheat, tea, rice and cigarettes are up by nearly 50 percent. Meanwhile, while one-third of Lebanon’s population was thought to live below the poverty line last September, that number has now rocketed to close to half the population.

The economic crisis has been a long time coming. It results from a noxious mix which has now laid the country low. Weak and corrupt governments, a failure to undertake structural reforms, and an economy which has been keep afloat on a sea of mounting debt (Lebanon is the third most indebted state in the world) have, together, combined to unleash the current crisis. The lockdown has exacerbated the situation and even the easing of restrictions is unlikely to help much: Lebanon exports little and tourism represents a key industry.

The unravelling began last autumn when the strategy deployed by Lebanon’s banks to bring in much-needed dollars – which has been compared to a state-sponsored Ponzi scheme – began to collapse. Lebanon’s central bank had encouraged wealthy investors to make large dollar deposits by offering ever-higher, unsustainable levels of interest. Paying those rates to depositors, however, required the bank to then offer even higher interest rates on new deposits. Last autumn, the strategy was effectively rumbled, new deposits dried up, and the banks were left with less dollars than they had promised to pay in interest.

The effects have been hard-hitting, given that dollars are widely used in everyday transactions in Lebanon. Banks have limited, or stopped altogether, cash withdrawals, even for small depositors. In November, some allowed only $100 a month to be taken out, although there are suggestions that large depositors have escaped these restrictions. The banks have also stopped short-term loans to small businesses, and no longer provide dollars to pay for imports. At the same time, the value of the Lebanese pound has collapsed by over 60 percent against the dollar, thus making it more difficult for the country to purchase imports and sending prices sky-rocketing. Many have seen the value of their pensions plunge precipitously.

The economic crisis has been both, in part, caused and worsened by Lebanon’s sclerotic and corrupt political system. The government announced pay-outs to poor families during the lockdown, but, as its various rival factions fought over how the money would be distributed and the currency collapsed, the value of the aid fell to less than $100.

As a key military and political player in Lebanon, Hezbollah has been a target of protesters. Hezbollah has held seats in Lebanese cabinets for the past 15 years and is increasingly no longer seen as an insurgent force, free from the corruption of its political rivals, but as part of the oligarchy that rules the country. The Iranian-backed army-cum-political party and its allies won at least 70 of the Lebanese parliament’s 128 seats in the May 2018 general election, while Hezbollah’s huge militia – far greater in strength than the Lebanese army – buttresses this political power. (Under Lebanon’s complex political system, political power is divided between the country’s predominant religious groups, with a Sunni Muslim serving as prime minister; a Maronite Christian as president; and a Shiite Muslim as parliamentary speaker).

Unsurprisingly, therefore, from early on Hezbollah itself has been in the sights of the protest movement; a movement which is notable for cutting across the country’s deep sectarian divides and which, also unusually, saw women and young people assume leading roles. The protesters demanded an overhaul of the political system, the formation of an independent, non-sectarian cabinet, and an end to government corruption, as well as action to tackle Lebanon’s economic crisis.

While the demonstrations last autumn led to the resignation of Hariri, Hezbollah was desperate to preserve the political status quo which serves it so well. Its chief, Hassan Nasrallah, both denounced the protests and then sent hundreds of supporters to harass and attack the demonstrators. They were unleashed both in Beirut and in Hezbollah strongholds such as Tyre and Nabatieh, showing the degree to which the terror group feared being challenged on its own turf.

After weeks of political wrangling, a new government under Diab, a university professor, was formed in January, but this failed to appease the protesters, who clashed with the security forces.

While consisting of many technocrats, few believe the new government is in any way independent. As Paul Salem of the US-based Middle East Institute has suggested: “The cabinet is composed primarily of advisers and appointees representing the main political oligarchs and parties allied with Hezbollah. [It] includes a fair number of capable technocrats, but it does not have any political independence to speak of, and on all major matters will likely operate as a shadow government to the four or five men that still cling to power.”

Hezbollah’s all-consuming determination to maintain its political influence was seen in the manner in which it spent weeks attempting to block the government applying for a loan from the International Monetary Fund. This reflected its fear that the IMF would demand not only economic but political reform in return. Last month, Hezbollah gave some ground, saying it would no longer oppose accepting the loan, so long as it did not come tied to political conditions about the make-up of the government. At the end of April, the government announced a “rescue package” designed to appeal to the IMF which would see sweeping austerity measures.

As the economic crisis continues to mount, negative attention is also being focused on Hezbollah’s wealth. “Where’s Hezbollah’s money?” the Lebanese journalist Abdullah al-Khiami asked on the website Janubiyah. The piece – which has been reflected in similar articles elsewhere – demanded that Hezbollah assist the country by injecting some of the billions it receives from Iran and supporters around the world into Lebanon’s ailing economy and welfare system.

“At a time when many workers have been fired from their jobs, the organisation continues to pay its officials a salary of about $600 a month, almost twice as much as the salaries in the private sector,” Khiami wrote.

Such arguments target one of Hezbollah’s great, but now much-diminished, assets: that it was traditionally seen by many Lebanese Shiites as on the side of the oppressed.

As Lebanon’s lockdown has begun to ease, protests have reignited in cities such as Beirut, Tyre and Tripoli. Often breaking night-time curfews, roads have been blocked and banks have been set alight and bombed. In response, security forces have used tear gas, live fire and rubber bullets against protesters. At the end of last month, a 26 year-old man was shot dead and dozens injured during demonstrations in Tripoli. Tripoli is Lebanon’s poorest city, with, even before the current crisis, 60 percent of its workforce making less than $1 per day and half of its families listed in the poorest classification.

Aside from the government’s ruthless use of force against the protesters,there are also reports that those arrested have been tortured by army intelligence units.

None of this, however, is likely to unduly trouble Hezbollah. As Iran’s largest proxy army, it is not the welfare of the people of Lebanon but the goals of its paymasters in Tehran – to help widen the Islamic republic’s sphere of influence and threaten and harass Israel – which remain its overriding concern.