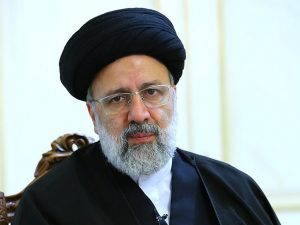 Ebrahim Raisi – a “brutal hangman” with an ultraconservative hardline agenda – was elected president of Iran on Saturday on a low-turnout, reflecting widespread public dissatisfaction with both the rigged poll and the Islamic regime. His victory was welcomed by Russia, the Assad regime and Iranian-sponsored terror groups in the region but provoked dismay in Israel and the west.

Iran’s outgoing president, the relatively moderate Hassan Rouhani, last month described the election as “a corpse”. Rouhani’s predecessor, hardliner Mahmoud Ahmadinejad, called for a boycott of the poll. More than 600 candidates had applied to stand in the election to replace Rouhani. But the conservative-dominated Guardian Council, which vets candidates, allowed only seven to go through. Half of the council’s members are appointed by the supreme leader, and the other half by the head of the judiciary. Raisi himself nominated three council members. Five of the ultimately approved candidates were, like Raisi, conservative hardliners. They included Rezaei and former secretary of the National Security Council and nuclear negotiator Saeed Jalili. The remaining two – Hemmati and ex-provincial governor Mohsen Mehralizadeh – were barely known centrist politicians with little popular appeal. Reformist or moderate candidates who might have stood a better chance against Raisi, such as Ali Larijani, a former speaker of the Iranian parliament; Rouhani’s vice-president Eshaq Jahangiri; and Mostafa Tajzadeh, a former deputy interior minister who was imprisoned for six years for leading anti-regime protests, were all blocked. The populist Ahmadinejad was also barred from standing. Three of the seven approved candidates – including Jalili and Mehralizadeh – dropped out on the eve of the election.

Turnout in presidential elections has ranged between 60 and 80 percent and high levels of voter participation in the albeit highly controlled elections is trumpeted by the regime as a key source of its legitimacy.

The next supreme leader?

“At this stage, when the supreme leader is very likely to pass away, Raisi represents a man who the entire security establishment trusts,” suggested Hadi Ghaemi, executive director of the Centre for Human Rights in Iran. “He has been on the side of the security and intelligence agencies – that use the judiciary for repression – his entire life.”

“The hangman of Tehran”

Raisi, whose black turban symbolises his claim to a lineage stretching back to the Prophet Mohammad, is a highly conservative cleric, who has spent his life in the Islamic Republic’s judiciary and is heavily implicated in some of its worst crimes.

Raisi became Tehran’s prosecutor-general in 1989 and deputy chair of the Judicial Authority in 2004. In 2014, he became Iran’s national prosecutor-general, before becoming head of the judiciary in 2019. As Amnesty argued, since then Raisi has “presided over a spiralling crackdown on human rights” with “hundreds of peaceful dissidents, human rights defenders and members of persecuted minority groups arbitrarily detained”. The human rights group highlighted the fact that the judiciary has subjected “thousands of protesters to mass arrests and at least hundreds to enforced disappearance, and torture and other ill-treatment during and in the aftermath of the nationwide protests of November 2019”. Raisi adopted a similarly harsh attitude during the 2009 “Green Movement” protests, suggesting: “To those who speak of ‘Islamic compassion and forgiveness,’ we respond: we will continue to confront the rioters until the end and we will uproot this sedition.” Despite this grim record, Raisi pledged during the campaign to defend “freedom of expression” and “the fundamental rights of all Iranian citizens”.

Raisi was the hand-picked choice of Khameni, whose “severe interpretation of Islamic jurisprudence as the basis for the state and government” he shares. Over the past five years, the supreme leader has repeatedly helped Raisi climb the greasy poll of Iranian politics.

… or a well-picked fall-guy?

As the example of Rouhani proves, Iranian presidents tend to leave office with their popularity shredded. While Raisi is a leading contender to succeed Khamenei, the supreme leader’s son, Mojtaba Khamenei, is also thought to be in the running. Some Iranians wonder, the Economist recently noted, if the effort to shoe-horn Raisi into the presidency is “in fact meant to undermine his chances of getting the top job”.

Israeli politicians and policymakers denounced Raisi’s election and warned of potential trouble ahead.

Experts on Iran suggest that Raisi’s political statements have mainly echoed those of Khamenei, while his pledges on the campaign trail were similarly unilluminating.

Raisi’s chances of becoming supreme leader if Khamenei dies during his term are by no means guaranteed. “Hardliners’ alliances keep shifting. A smooth transition of power requires preparation and reinforcement, but Iran’s politics are too complicated to allow Raisi and his enablers to easily construct a power base according to their blueprint,” wrote Ali Reza Eshraghi in a briefing for the European Council on Foreign Relations earlier this month. The presidential race will do little to boost his popular legitimacy: his victory, with possibly the lowest voter turnout in the Islamic Republic’s history, would be widely viewed as engineered by the Guardian Council.”