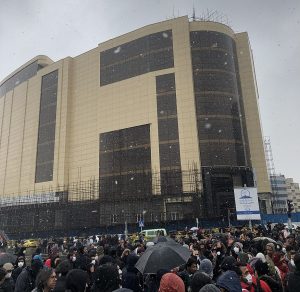 On Wednesday, President Hassan Rouhani announced that Iranians have defeated the “enemy’s conspiracy” and were celebrating their victory.

A spokesman for the office of the UN high commissioner for human rights said it was deeply concerned by reported violations of international norms and standards on the use of force, including the firing of live ammunition, against demonstrators. Amnesty demanded that the Iranian authorities “must end this brutal and deadly crackdown immediately”.

On Monday, Iran’s Revolutionary Guard threatened “decisive” action to halt the disturbances, while the Supreme Leader, Ayatollah Ali Khamenei defended the measure – claiming it would raise vital funds to increase cash handouts to the poor – and denounced the protesters as “thugs” supported by the country’s foreign enemies.

For the first time in the history of the Islamic republic, the Supreme Leader’s office in Yazd was attacked by demonstrators.

The demonstrations – the first since those of December 2017 – come at a time when Iranian-backed regimes in Iraq and Lebanon have also faced unprecedented large-scale protests against Tehran’s stranglehold over their countries.

On Saturday, tight internet restrictions were imposed by the authorities. “Iran is in the midst of a near-total internet shutdown,” NetBlocks which monitors internet access worldwide. On Tuesday, a government spokesman said: “The internet will come back gradually in some provinces where there are assurances the internet will not be abused.” In the meantime, assessing the true scale of the demonstrations – and the deaths inflicted by the regime – is hard to assess.

The BBC Persian service reports from its sources inside the country: “Security forces have been filmed firing on protesters; the families of those killed say the authorities have refused to hand over their bodies for burial; there is a heavy security presence in public squares and on major streets; many university students have been arrested; and the judiciary has warned that sending videos abroad is a criminal offence.” Amnesty said that video footage showed that “snipers have also shot into crowds of people from rooftops and, in one case, a helicopter.”

The decision to hike petrol prices by 50 percent and ration supplies was made in response to the economic crisis which has been exacerbated by the tough sanctions imposed by the Trump regime when it pulled out of the 2015 nuclear deal. While the European signatories to the Obama administration’s agreement have stuck by its terms, Iran is increasingly flouting them. Even as it steps up its nuclear programme, Iran’s currency has sunk, food prices have rocketed, while rampant inflation has wiped out people’s savings.

Citing periods of unrest which occurred in Iran in 2003, 2009 and 2011, the Washington Post’s former Tehran correspondent, Jason Rezaian, suggested: “Popular uprisings are nothing new in the Islamic republic. But this time feels different.” Whereas in 2009 those protesting against electoral fraud in that year’s presidential election rallied under the slogan “Where’s my vote?”, this time there are loud chants of “Death to Khamenei”. “That tells you call you need to know about the evolution of discontent.”

“What has authorities most concerned this time around is the widely shared sentiment among protesters that Iranians are close to hitting a bottom and can no longer put up with the many pressures — social and economic — they have been forced to bear,” argued Rezaian. “The current protests started in response to a specific and unpopular economic decision, but they have evolved quickly into calls for the end of the ruling system.”

Alex Vatanka of the Middle East Institute noted a key difference with the protests which occurred in December 2017. These were originally stoked by Revolutionary Guard hardliners seeking to undermine Rouhani.

“It took days for the instigators to realise they had unleashed popular anger that they could not control and that would target the entire regime,” he suggested. “This time, no regime faction appears to have instigated the protests, and by most accounts they seem to have been spontaneous … Khamenei and the regime as a whole have been the primary target from the very beginning.”

Despite the disturbances appearing to subside somewhat on Monday, the long-term impact may be significant. “Raising fuel prices may mark a significant turning point in the people’s relationship with the regime, devastating their trust in their leaders amid rising inflation rates and devaluation of their national currency,” argued an analysis prepared by the Washington Institute for Near East Policy.

It also pointed to signs of a split within the regime as confidantes of the Supreme Leader sought to blame Rouhani. Many members of the Iranian parliament, who are preparing to face the voters in elections next February, initially protested against the decision. Once Khamenei had rowed in behind it, however, their opposition inevitably melted away.

The Iranian protests have certain similarities with the unrest which has rocked Iraq and Lebanon over the past six weeks, where economic discontent sparked into a much broader challenge to the political system as a whole and the corruption which characterises it. Moreover, in all three countries the demonstrations have been spontaneous, in part a reflection of the manner in which any organised challenge to the existing order is likely to have been ruthless suppressed.

Nonetheless, there are also important differences. In Iran, the state is far stronger, bolstered, the Washington Institute analysts suggest by “a clearly articulated ideology, deeply believed by the minority who support it strongly, that the protests are an American plot to overthrow the regime”.

Crucially, too, the Lebanon and Iraq protests seek to challenge the Iran’s meddling and domination.
“In the very different contexts of Iraq and Lebanon, the protests now under way have a similar focus on political and economic corruption, mismanagement, and limited popular access to power and resources,” Jonathan Spyer director of the Middle East Centre for Reporting and Analysis, has argued. “In both cases, despite this focus, the demonstrators are being confronted with the fact of the domination of their country by an outside-imposed structure.”

Thus in Iraq, demonstrators have focused their anger on the Islamic republic and the huge sway it holds over the country’s nascent democracy. This has led to the burning of portraits of Khamenei and of offices linked to the hugely powerful Iranian-backed paramilitary groups.

Iran’s baleful influence is personified by Major General Qassem Suleimani, the head of the Revolutionary Guard’s Quds Force. Suleimani, who has also been the key player in Iran’s successful effort to sustain the Assad regime in Syria, negotiated the deal which put the current parliamentary speaker, president and prime minister into power.

The Quds Force head also appears to be coordinating the brutal crackdown in Iraq in which over 250 demonstrators have lost their lives. He is reported by the Associated Press to have flown to Baghdad the day after the protests began. Almost immediately, the Iranian-backed militias of the Popular Mobolisation Forces were deployed on rooftops, where snipers were given orders to shoot to kill.

Perhaps the most remarkable feature of the protests in Iraq, argues Eliora Katz, a Middle East analyst based in Washington DC, is that it has taken root most strongly in Shiite neighbourhoods. The movement thus defies “reductive sectarian narratives”.

The unrest in Lebanon – which began in mid-October and was originally focused on new taxes on tobacco, petrol and internet phone services – has seen Hezbollah come under attack. That attack is focused on its now central role in Lebanon’s corrupt, closed political system; the Iranian-backed army-cum-political party and its allies won at least 70 of the Lebanese parliament’s 128 seats in last May’s general elections. Hezbollah’s huge militia – far greater in strength than the Lebanese army – buttresses this political power.

While the demonstrations led to the resignation of prime minister Saad Hariri, it is clear that Hezbollah is desperate to preserve the political status quo which serves it so well. Its chief, Hassan Nasrallah, both denounced the protests and then sent hundreds of supporters to harass and attack the demonstrators. They were unleashed both in Beirut and in Hezbollah strongholds such as Tyre and Nabatieh, showing the degree to which the terror group feared being challenged on its own turf. Indeed, protesters attacked and torched the Hezbollah offices in Nabatieh. Hezbollah is on the back foot in part because Iranian funding (which constitutes 70 percent of its income) has been cut, forcing it to reduce wages to its fighters and money on the social services it provides.

As Spyer has argued, the Iraqi and Lebanese demonstrators have exposed the true character of the power structure which confronts them. “Once the decorations, fictions and formalities are stripped away, the protesters are faced with an unelected, armed, utterly ruthless political-military structure which is the final decider and wielder of power in the country. This structure, in turn, is controlled from Iran, via the mechanism of the Islamic Revolutionary Guards Corps,” he wrote.

Moreover, Spyer concluded, for all of its talk of it leading a “resistance axis” to the supposed regional domination of the US and Israel, it is Iran which is the true oppressor.

“In reality, as current events in Iraq and Lebanon are showing, the Iranian system most resembles a colonial one, in which the ability of local populations to decide for themselves disappears, and an Iran-controlled structure places itself in rule over them. This rule is then conducted in a manner intended to benefit Tehran, with indifference to the economic and other interests of the subject population.”