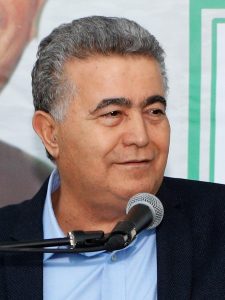 With less than two months to go until polling day, the contours of the battlefield for Israel’s general election on 17 September have begun to look a little clearer.

Over the past week, Labor leader Amir Peretz announced a deal between his party and centrist Gesher party. Its leader, Orly Levy-Abekasis, will occupy the second-place slot on Labor’s list for the elections.

At the same time, Peretz surprised many by saying that Labor was no longer seeking an alliance with the left-wing Meretz party and the newly formed Israel Democratic party of former prime minister Ehud Barak. The announcement provoked criticism – led by former leadership contender Stav Shaffir – that the left risked splintering its support at the polls.

Meanwhile, on the right of the political spectrum, former education minister Naftali Bennett ceded the leadership of the New Right to Ayelet Shaked. Shaked, who served alongside Bennett in Benjamin Netanyahu’s last cabinet as justice minister, is a popular figure on the Israeli right. She is now in negotiations with the Union of Right-wing parties to forge an alliance of parties to the right of Netanyahu’s Likud party.

Peretz’s announcement of a merger with Gesher surprised many, given that negotiations with Meretz had been reportedly close to conclusion after weeks of talks. Peretz had also spoken of his keenness to explore some form of deal with Barak.

In the end, though, in a move that has been interpreted as a push to the centre, Peretz concluded an agreement with Levy-Abekasis. Originally elected as an MK for Yisrael Beitenu, she quit Avigdor Liberman’s right-wing party in 2016 and sat for three years as an independent in the Knesset. She then refounded Gesher, attempting to woo working-class Israelis with a left-leaning economic platform. The party enjoyed an initial poll bounce, but then appeared to drift and failed to cross the electoral threshold in April’s elections to enter the Knesset.

Peretz described Levy-Abekasis as “a pioneering woman, with a broad worldview of social justice … of the state’s responsibility to the fate of the elderly, the handicapped, young couples” and others. As well as serving as the Knesset’s deputy speaker, Levy-Abekasis made a name for herself with campaigns focused on gender equality, vulnerable young people and victims of sexual assault. She quit Liberman’s party over its failure to push a social policy agenda in the 2016 negotiations which saw Yisrael Beitenu join Netanyahu’s government.

The main opposition party, Benny Gantz’s Blue and White, welcomed the merger between Labor and Gesher, saying it would prevent thousands of votes being lost”.

At the announcement of the merger, Levy-Abekasis suggested “it’s time we let go of the terms ‘right’ and ‘left’ and come together for the good of the country”. It is with this in mind that the merger is perhaps best analysed.

Peretz, who was born in Morocco, has long been concerned that Labor has acquired an image of Ashkenazi elitism. That historic association has been exploited for decades by Likud, whose multiple election victories have been forged with the strong backing of working-class Mizrahim, Jews who hail from Arab or Muslim countries, rather than those whose roots are in central and Eastern Europe.

Levy-Abekasis may help to counter that image. In its first incarnation, Gesher was the party of her Morocco-born father, long-serving former foreign minister David Levy. Levy formed the party as a breakaway from Likud in 1993 following Netanyahu’s election as leader and its shift toward the right. A former union activist, Levy had been one of Likud’s first young, working-class Mizrahi members and was closely associated with the party’s highly successful pitch to such voters from the late 1970s onwards.

Peretz, who reiterated Labor’s support for a two-state solution on becoming its leader earlier this month, hinted at his desire to broaden the party’s demographic base when he ruled out a pact with Meretz and Barak. “That kind of connection,” he stated, “puts up the walls that prevent new groups [in Israeli society] from joining us.” Peretz’s enthusiasm for a pact with Barak also appeared to cool after media reports of the former prime minister’s links to Jeffrey Epstein, a US billionaire involved in a sex trafficking scandal, dented his party’s poll ratings.

Peretz’s stance has, however, provoked some disquiet in Labor with Stav Shaffir, who ran in the party leadership primaries, saying she would continue to push for a deal with Meretz and the Israel Democratic party. She argued that “the merger that would bring the biggest success would be joining the three parties together, without of course losing the identity of each party”. “In the current situation,” Shaffir warned, “one party or even two in our [left] camp are likely to fall under the threshold. It is quite simply a danger to precious seats for the left that we must not allow”.

While Labor was teaming up with Gesher, the New Right was casting around for potential partners. Its leaders, Shaked and Bennett, quit the hard-right Jewish Home party last December in a bid to secure the support of more secular right-wing voters who were put-off by their former party’s national-religious ties. But, having failed to cross the threshold in April, the New Right is now seeking to do a deal with Jewish Home and its new allies in the Union of Right-wing parties (URWP). The far-right Otzma Yehudit party has since quit the URWP but Shaked is aiming to bring it back into the right-wing fold. As he did earlier in the year, Netanyahu is also said to be encouraging the URWP leaders to re-establish their alliance with Otzma Yehudit.

A poll this week pointed to both the potential prize for Shaked and the perils for Netanyahu. It showed that an alliance between the New Right and the URWP would see the slate win 13 Knesset seats. However, the poll also showed that the gains for such an alliance would come at the expense of Likud, which would win 28 seats, narrowly behind Blue and White. The shift, though, is potentially crucial as it would give Gantz, as head of the largest party, the right to first attempt to form a government. Unsurprisingly, Netanyahu has been lobbying the URWP not to reach an agreement with the New Right. So, too, reportedly has his wife, Sara. She apparently clashed with both Shaked and Bennett when the pair served as aides to Netanyahu over a decade ago (she’s also thought to have quashed a potential plan that would have seen the popular Shaked join the Likud slate).

URWP leader Rafi Peretz – who has been dogged in recent weeks by controversy following comments about intermarriage and so-called gay conversion therapy – has now entered talks with Shaked. He has previously expressed opposition to a secular woman leading a national-religious alliance; a position backed by some prominent right-wing rabbis.

Bennett, who previously appeared queasy over any deal with Otzma Yehudit and has also sought todistance himself from elements of the religious right, has subsequently emphasised that any deal would be a “technical bloc”. “Think of it as a bus that people board with different opinions,” he said this week, “and then when it gets to a certain benchmark, they get off and go their separate ways.”

More broadly, though, the ultimate destination of the bus which is travelling towards Israel’s second election this year remains unknown.