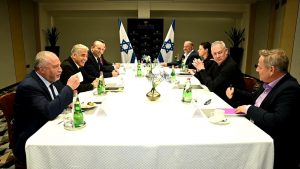 Israel’s “change coalition” faces its most critical test in the coming days as the Knesset holds a confidence vote in the new government on Sunday. Success in the vote will bring to an end to Benjamin Netanyahu’s 12 years in office.

Thumbs up from the polls

A survey for Channel 12 television showed 46 percent of Israelis backed the formation of the new government. Thirty-eight percent supported the country holding a general election – which would have been the fifth since April 2019 – and 15 percent said they didn’t know. The poll also showed more Israelis trust Bennett (at 44 percent) than Netanyahu (on 35 percent). However, only 24 percent believe the ideologically heterogenous new government will last.

A desperate Netanyahu claimed on Sunday that the election had been stolen by the “deep state”. “We are witnesses to the greatest election fraud in the history of the country and in my opinion, the history of democracies,” the prime minister told Likud MKs. Speaking on the right-wing Channel 20, Netanyahu said the “deep state is deep within this government” and accused Bennett of being a “habitual liar”. “Bennett is holding a fire sale on the country,” he claimed, and said that votes had been “stolen from right [and given] to the left”.

Setting a markedly different tone from Netanyahu, Lapid defended Israeli democracy but appealed to supporters of the new government to reach out to its opponents. “This government is being formed because it’s the majority. There were elections, we have a majority, we’re forming a government. That’s democracy, that’s its strength, that’s the choice Israel made,” Lapid said. “I know you waited a long time and this is your success, but there are a lot of people in Israel who are concerned about this government. We need to reach out to them and lower the tensions. We don’t need to celebrate in the town square and shout that we won. This is the time to unite Israeli society. They aren’t our enemies.”

What’s on the agenda?

Ahead of the confidence vote, the web of coalition agreements binding the new government together must be formally handed to the Knesset by Friday. However, details have already begun to emerge:

Lapid needed Bennett’s MKs in order to depose Netanyahu but the hardliner will have limited room for manoeuvre in office, some commentators have suggested. “The power behind the throne will be someone else entirely. The coalition was negotiated by Lapid and will have a majority of ministers from the centre and left, in deference to their greater numbers. And the government will rely on the votes of an Arab party for its continued existence. In other words, Lapid outfitted Bennett in a golden straitjacket—giving him the trappings of power without the ability to fully exercise it,” suggested The Tablet’s Yair Rosenberg.