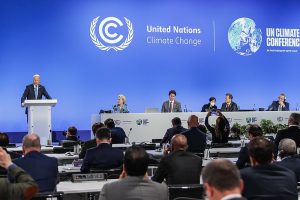 As the world gathers in Glasgow for the COP26 climate conference, Israel has featured prominently so far – for both positive and unexpected reasons.

Two days before the start of the conference, prime minister Naftali Bennett and energy minister Karine Elharrar announced that Israel was pledging to decarbonise its economy by 2050. This deadline supersedes a Netanyahu-era commitment to reduce carbon emissions by 80 percent by 2050. The shift brings Israel into line with most developed countries – including the UK, US, Canada, France, Australia and Germany – to commit to achieving net-zero emissions by 2050.

Israel’s commitment to decarbonise by 2050 was rooted in its identity as the ‘start-up nation’:

Holding their feet to the fire

Perhaps inevitably with an issue as pressing as climate change, environmental activists have been keen to hold Israeli politicians accountable for their climate responsibilities. Last weekend saw 12,000 people march through Tel Aviv in Israel’s biggest climate demonstration to date, attended by Israeli Labor leader and transport minister Merav Michaeli, under the slogan “Time has run out for the leaders, there’s no place for declarations, only immediate action”. Meanwhile, two teenagers active in the Israeli Fridays4Future youth movement – Alma Pomagrin, 15 and Lia Lev, 16, both from the Tel Aviv area – have attended COP26 itself and delivered a letter to Bennett signed by 524 young Israeli activists. “The bitter truth is that our country’s current targets for renewable energy and emissions cuts are disappointing and insufficient”, the letter said, appealing to Bennett to “listen to the voices we bring with this letter, in the name of the youth of Israel, and adopt more ambitious goals for renewable and emission reductions”. Bennett praised Pomagrin and Lev and promised to meet with the duo in Israel.

The Israeli delegation at COP26 has also featured in headlines for altogether more unexpected reasons. Energy minister Karine Elharrar was denied access to the conference venue on Monday due to the entrance to the conference building being inaccessible to wheelchair users. After being refused entry, a shuttle transport alternative was unable to resolve the situation due to not being wheelchair accessible itself. Elharrar was forced to return to her hotel in Edinburgh as a result. UK environment secretary George Eustice said that the government “deeply regretted” the treatment of Elharrar, who has muscular dystrophy, and said that the lack of arrangements owed to a miscommunication. Elharrar entered the conference alongside prime minister Bennett without issue on Tuesday, following an apology from prime minister and host Boris Johnson, who invited Elharrar to join his bilateral meeting with Bennett.

Alongside the issue of climate change, COP26 has also provided an opportunity for world leaders to meet and discuss other issues. Bilateral talks included a meeting between prime minister Bennett and French president Emmanuel Macron, in which they discussed Iran’s nuclear program and continued uranium enrichment. Likewise, in a meeting with Australian prime minister Scott Morrison, Bennett urged Morrison to ensure that Australia – which currently sits on the board of the UN atomic agency – rebukes Iran for breaching its nuclear commitments, and to follow through with an Australian parliamentary committee recommendation to proscribe Hezbollah in its entirety as a terrorist group. Bilateral meetings between Bennet and the leaders of the UK, Italy, India, Bahrain and NATO are similarly likely to see tense discussion of regional security issues alongside the climate.

COP26 has already seen some progress towards dealing with the climate crisis:

Although most world leaders will leave in the coming days, COP26 will continue through to 12 November. With some progress made already, it seems clear that Israel intends to take a leading role in the effort to combat climate change.