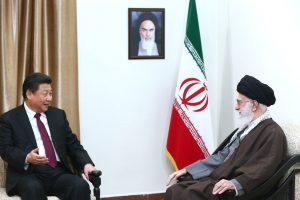 Iran and China signed a major 25-year economic and military partnership agreement at the weekend which could boost the Islamic republic’s sanctions-wracked economy by $400bn. The move comes as Tehran continues to resist efforts by the Biden administration to revive the 2015 nuclear deal which Donald Trump withdrew from three years ago.

A strategic agreement was first proposed by President Xi Jinping during a visit to Tehran in 2016 (pictured). However, Iran seemed to initially drag its feet as European businesses began to invest in the country following the easing of sanctions that accompanied the Joint Comprehensive Plan of Action. Trump’s withdrawal from the JCPOA cut Iran’s break-out time – the period it requires to assemble enough fissile material to fuel a nuclear warhead has fallen from one year before 2018 to three or four months now, according to US secretary of state Anthony Blinken – as the Islamic republic itself reneged on the deal. Trump’s approach also revived Iran’s interest in China’s 2016 proposals. The Iranian supreme leader, Ayatollah Ali Khamenei, appointed a conservative former speaker of the parliament, Ali Larijani, as a special envoy.

Despite the agreement remaining shrouded in secrecy, China and Iran hailed the closer ties between the two countries.

The agreement is part of Xi’s “Belt and Road Initiative” which has seen China vastly increase its overseas economic investment programme in order to boost its geopolitical clout and ensure that Chinese goods move with ease from East and Central Asia to the Middle East and Europe. During his current tour of the region, Wang also visited Saudi Arabia and, after leaving Iran, headed for the UAE, Bahrain and Oman. China has indicated it is ready to host direct talks between Israel and the Palestinians, in a calculated bid to undermine the US’ position in the Middle East.

The economic relationship between Iran and China is a highly significant one for the Islamic republic, especially in the face of US sanctions.

Iranian oil shipments to China have soared in recent months. China imported approximately 478,000 barrels of oil from Iran a day on average in February – a figure that’s expected to double to about 1m in March. Iran evades US sanctions by disguising its shipments as Omani ones. The Biden administration has warned China it will continue to enforce Trump-era sanctions. This enforcement could take the form of “secondary sanctions” like those imposed by Trump on some Chinese energy and transport companies in 2019.

But not all Iranians are pleased with what many see as a secret and exploitative agreement with China.

China has not proved the most reliable of economic partners for Iran in the past. China National Petroleum Corporation signed a contract to develop the South Azadegan oilfield in 2009 after Japan’s Inpex withdrew. The agreement was terminated by Iran thanks to alleged underperformance and delays. Another CNPC multibillion-dollar contract – in the South Pars gasfield – was also a flop. CNPC stepped in after France’s Total pulled out under threat of US sanctions, but the Chinese energy giant subsequently abandoned the project for the same reason.

The closer military and security ties envisaged by the agreement – which in some respects mirror those mapped out in a 2013 deal between Russia and China – are already evident.

“It remains to be seen how many of the ambitious projects detailed in the agreement will materialise,” the New York Times noted on Saturday. “If the nuclear agreement collapses entirely, Chinese companies, too, could face secondary sanctions from Washington, an issue that has infuriated China in the past.”