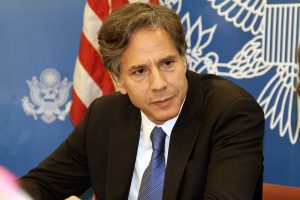 Anthony Blinken last week used his first appearance before a congressional committee since being confirmed as the new US secretary of state to adopt a tough line on Iran. America’s top diplomat (pictured) said the Biden administration did not intend to make any initial “concessions” to Tehran to encourage it to return to compliance with the 2015 nuclear deal. Blinken also said that Iran’s so-called breakout time – the period it requires to assemble enough fissile material to fuel a nuclear warhead – had fallen from one year before Donald Trump unilaterally withdrew from the accords in 2018 to three or four months. As part of its effort to re-engage with Iran, the new administration has accepted an invite from the European Union to broker discussions between the original signatories to the agreement. Iran has, however, turned down that invitation.
“I think the ball is in their court to see if they are serious about engaging or not,” Blinken said. He also repeated Joe Biden’s desire to strengthen the accords and make them “longer and stronger”. “We have fundamental problems with Iran’s actions across a whole series of things, whether it is support for terrorism, whether it is a ballistic missile programme,” said Blinken. “An Iran with a nuclear weapon or with the threshold capacity to have one is an Iran that is likely to act with even greater impunity when it comes to those things.”
Blinken spoke as the White House said it was “alarmed” by an increase in attacks on Saudi Arabia by the Iranian-backed Houthi rebels in Yemen. They launched a volley of drones and missiles aimed at Saudi oil facilities at the weekend, despite efforts by the UN and US to revive Yemen’s stalled peace talks and bring an end to the bloody conflict.
Read full article