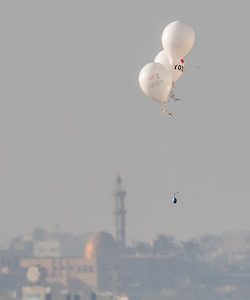 The terrorist group Hamas, which has governed the Gaza Strip since it seized power in 2007, has this week threatened Israel over the supply of aid into Gaza.

The threats come in the context of incendiary balloon arson attacks, a Hamas practice since 2018. Terrorists in Gaza launched several incendiary balloons into southern Israel on Sunday afternoon. The balloons sparked a number of fires, including three brushfires in the Eshkol region. These are the first arson attacks from Gaza since early July. “A fire investigator from the Southern District Fire and Rescue Services found that the blaze was caused by the launching of incendiary balloons”, a fire department spokesperson said. There were no reported injuries or damage to property as a result of the attacks.

As Judah Ari Gross has written, incendiary balloons have become one of Hamas’s preferred methods of communication with Israel to circumvent the lack of direct contact between the Jewish state and antisemitic terrorist group.

Late on Sunday, IDF jets struck a series of targets in Gaza in response to the incendiary balloon attacks. IDF warplanes hit several buildings in a Hamas military base, as well as “infrastructure and utilities used for activities” by the terror group. The IDF claimed that the base was located “adjacent to civilian sites, including a school”. According to al-Resalah, a Hamas-affiliated news channel, Israeli planes bombed areas west of Gaza City before striking to the east of Khan Younis. There have been no reports of casualties. An IDF statement said that Israel would “respond aggressively against continued terror attempts out of the Gaza Strip”, while prime minister Naftali Bennett has repeatedly said that he would not allow such incidents to occur without a response. “Israel is interested in calm and has no interest in harming Gaza residents, but violence […] will be met with a strong response”, Bennett said following incendiary balloon attacks in early July.

Aside from its strikes against Hamas targets, Israel also announced that it would cut the size of the Gaza Strip’s fishing zone as a result of the balloon attacks.

Hamas responded to Israel’s airstrikes with mockery, with spokesperson Hazem Qasim characterising the strikes as a “failed attempt to show [Israel’s] impotent power and restore its army’s battered image after it was shaken” – apparently a reference to the 11 days of fighting between Israel and Hamas in May 2021. “The noble resistance is ready to deal with all options”, he continued, “nor will it allow the occupation to impose its equations”, referencing the balance of deterrence between Hamas and Israel. The response suggested that Hamas is continuing its efforts to stake its claim as a leader of the Palestinians against its Fatah rivals, who govern the Palestinian Authority in the West Bank.

The most important context of the minor crossfire took place on Sunday.

During the May 2021 war, a combination of Israeli strikes against Hamas targets and misfired Palestinian rockets caused at least $290 million worth of damage in the Gaza Strip. Israel has refused to allow major reconstruction beyond what defence minister Benny Gantz has described as “basic humanitarian aid” levels unless Hamas returns Israeli civilian captives, Averga Mengistu and Hisham al-Sayed, as well as the remains of two IDF soldiers – Oron Shaul and Hadar Goldin – who died in the 2014 war between Israel and Hamas. Under this policy, Israel has limited imports to Gaza to food, fuel and medicine, as well as recently loosening restrictions on certain critical industries, including textiles. “The Hamas terror group in Gaza needs to understand: We are determined. If Hamas wants reconstruction and economic development, the time has come that it takes concrete steps to maintain the calm, to halt the rearmament and to return the boys home”, Gantz said last month. Israel was reportedly planning another now-cancelled easing of the blockade on Gaza for this week, prior to the balloon attacks.

Mutual distrust will remain an obstacle to rebuilding in Gaza until Israel and Egypt receive assurances that goods entering the Strip will not end up in the hands of terrorists. Until an informal arrangement between the various parties can be agreed – with Egypt and the UN as mediators – the people of long-suffering Gaza are likely to continue to lose out as a consequence of Hamas’s violent aggression.