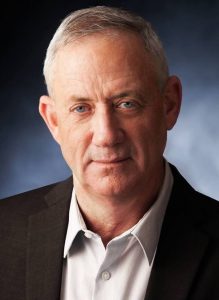 Israel’s opposition leader, Benny Gantz, has seized the political initiative and is attempting to form a minority government within two weeks to oust Benjamin Netanyahu from power and end the country’s year-long political stalemate.

The former IDF chief’s move follows a dramatic week in the wake of last Monday’s inconclusive general election. Israelis have voted three times in the past year and on each occasion failed to give either Netanyahu or Gantz a majority in the Knesset.

Netanyahu had initially appeared to pull off a remarkable comeback in last week’s election. Unlike in September’s general election, his Likud party reestablished itself as the largest party in Israel’s parliament, while Gantz’s momentum appeared to have stalled. However, early results and exit polls which showed Netanyahu’s right-wing bloc on the threshold of a majority proved to be inaccurate. When the final count was declared late last week, the prime minster and his allies had secured 58 seats in the 120-seat Knesset.

But, although the centre-left and Arab bloc won only 55 seats (down from the 58 seats it won in September), Gantz’s hopes of becoming prime minister have been boosted by signs that the maverick right-winger, Avigdor Liberman, may be about to throw his party’s seven seats behind him. Liberman, a former defence minister and one-time ally of Netanyahu, refused to back either the prime minister or Gantz in the wake of last April and September’s elections, thus assuming the role of kingmaker. Now, though, Liberman appears to have turned decisively against Netanyahu, potentially bringing his decade-long premiership to a close as the prime minister goes on trial next week on corruption charges.

Gantz’s effort to form a minority government is, however, a high-wire act requiring the cooperation of an unlikely and unstable coalition ranging from Liberman on the right to anti-Zionist legislators in the Arab-Israeli Joint List. It is threatened by potential rebels from within Gantz’s own Blue and White alliance. And it has provoked fury among Netanyahu and his supporters. Over the weekend, security around Gantz was tightened by the Knesset following a wave of death threats which, some fear, echoes the campaign of incitement against the assassinated former prime minister Yitzhak Rabin.

The first signs that Gantz – who, throughout the election, had denied Netanyahu’s charges that he planned to form a government backed by the Joint List – was planning a dramatic bid to eject Netanyahu from office came in a speech on Saturday night. In it, Gantz declared that the prime minister had “lost [the election]. The majority of the people do not want his continued rule, and that is what the people will receive.” He went on to say he would form a “strong and stable government” and accused Netanyahu of fanning the flames of hatred and division in the Israeli public, and vowed not to let him “turn brother against brother.”

Gantz’s remarks came after a furious Netanyahu accused his opponents of attempting to “steal the election” by pushing a bill – which has won the backing of all the opposition parties, including Liberman’s – that would prevent an indicted individual serving as prime minister (such provisions already apply to government ministers). Having initially claimed victory, the prime minister also attempted to delegitimise the election, pointing to undefined “errors in the recording and writing up of results”.

Netanyahu has continued to rail against the Arab-Israeli parties, accusing them of being “terror supporters” and suggesting that any government formed with their backing would be illegitimate.

In recent days, however, Gantz has hit back strongly against Netantahu’s attacks on the Arab-Israeli voters. “We’ll respect all citizens of Israel, whether they chose me or not. Just as I expect the nations of the world to respect the Jewish citizens in their lands, we would never dare say that the votes of 20 percent [of the population] from Israel’s Arab citizens are worth less,” the former IDF chief said.

He also drew explicit comparisons between the incitement waged against Rabin (which Netanyahu, then leader of the opposition, was accused of failing to condemn) by the Israeli far right and the prime minister’s current language. “Netanyahu and his people are intentionally fueling violent and extreme discourse,” Gantz said. “Bibi [Netanyahu], we saw what happened when the incitement runs wild and no one stopped it in 1995.”

Israel’s president, Reuven Rivlin, will begin meetings with party leaders later this week. He will formally ask each who they recommend should be prime minister. Rivlin will ask the party leader with the best chance of building a 61-seat majority to form a government. That candidate will have 28 days (plus the option of a two-week extension) to form a coalition. If that candidate fails, the president will ask them to return that mandate to him so he can ask another party leader to attempt to assemble a coalition.

Critically, it appears that Liberman is planning to recommend to Rivlin that Gantz become prime minister. The two men met on Monday and Gantz immediately accepted a series of proposals from Liberman, including the introduction of civil marriage in Israel and that public transport should run on the Sabbath. The Yisrael Beitenu leader has been pushing a secularist agenda and his antagonism to Netanyahu’s ultra-Orthodox allies in the Shas and United Torah Judaism parties has been a critical factor in the prime minister’s inability to form a government. He has also not denied weekend media reports that his desire to eject Netanyahu from office stems from his belief that the prime minister is behind a series of legal moves against him and his children.

After the two met, Liberman thanked Gantz for a “truly good” meeting and pointedly suggested that “the worst of all possible scenarios” would be a fourth election.

Gantz also spoke with the heads of three of the Joint List’s constituent parties, Ayman Odeh, Ahmed Tibu and Mansour Abbas. He repeated his commitment to form a government that would serve both Israel’s Jewish and Arab citizens. Gantz, however, did not speak with the leader of the most radical party in the Joint List, Balad head Mtanes Shehadeh. When it nominated Gantz in September, the Joint List became the first Arab Israeli party to recommend a prime minister to the president since 1992. Balad’s three MKs, however, refused to join the recommendation.

Following his conversation with Gantz, Odeh hinted that the alliance would support the Blue and White leader, saying: “We stick to our goal of replacing Netanyahu’s legacy, and it starts by respecting the united voice of the Arab public and our Jewish partners.”

He also made clear that the Joint List would act as a “united faction, with all four of its opponents”. Talks between Blue and White and all four Joint List parties, including Balad, are now scheduled.

The talks came as Gantz’s deputy, Yair Lapid, publicly endorsed a minority government backed by the Joint List. He accused the prime minister of hypocrisy, saying that he had “collaborated with them in this way a thousand times”. Gantz is planning to flex his muscles next week by building a coalition to unseat Likud MK Yuli Edelstein as Knesset speaker, replacing him with Blue and White’s Meir Cohen.

However, Gantz’s road ahead is not a smooth one. Blue and White is an alliance of parties, ranging from Lapid’s centrist Yesh Atid to former defence minister Moshe Ya’alon’s more right-leaning Telem. Two of the MKs from the Telem faction, Yoaz Hendel and Zvi Hauser, are opposing moves to form a government on the back of Joint List votes. Ya’alon has reportedly demanded the two back down or resign their Knesset seats (they would be replaced by the next two candidates on the party’s list). Blue and White is also believed to be threatening that they will not be allowed to stand for the party if new elections are ultimately held. Gantz, too, appears in no mood to compromise with the pair, suggesting: “In Blue and White there can be a variety of opinions, but there is only one position and one decision – that of the chairman of the party. Not that of senior officials or associates.” Hendel and Hauser’s votes could prove critical in a Knesset confirmation vote if Gantz isn’t able to secure the votes of Balad.

At the same time, Liberman’s intentions beyond ejecting Netanyahu are also unclear: would he be willing to join a minority government led by Gantz alongside Labor, or is he hoping that the prime minister’s fall might open up the possibility of a unity government between Blue and White and Likud?

Whatever Netanyahu claims, however, parties which were pledged to support him won 2.2 million votes last week, while those opposed to him won 2.33 million votes. If Gantz can successfully marshal the leaders of the latter, Israeli politics may be about to enter a new era.