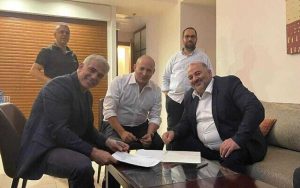 Two months after Israel’s fourth election in two years, a coalition agreement has been reached that would unseat Benjamin Netanyahu after 12 years.

Under the terms of the coalition agreement, Bennett would serve as prime minister until September 2023, when Lapid would take over from him until the Knesset term ends in November 2025. Analysts have highlighted Lapid’s remarkable personal sacrifice in allowing Bennett to serve first despite having only a third of Lapid’s parliamentary representation. It appears this compromise was vital in the formation of a viable coalition. With only 5 percent of seats, Bennett will be the weakest Israeli prime minister in history.

Bumps in the road

Prime minister Benjamin Netanyahu will remain in post until the new government has been finalised and approved by the Knesset. The majority negotiated by Lapid is set to include 61 of 120 members of the Knesset – a majority of one – representing the narrowest possible majority at risk from a single dissenting vote. MKs from right-wing coalition partners are expected to come under significant pressure from Netanyahu in the coming days. One MK from Bennett’s Yamina party refused to join the coalition outright, while another, Nir Orbach, has already indicated that he may vote against it.

The Knesset vote to approve the new coalition is scheduled by the speaker, currently Yariv Levin from Netanyahu’s Likud. Sources close to Levin have reportedly indicated that he plans to allow the vote of confidence on the latest possible date, in order to maximise the likelihood that disagreements within the coalition mean it cannot be approved. The latest possible date is in itself contested between claims that the seven day window begins the day a coalition is announced – i.e. Wednesday – or the Monday after that, when it can be formally announced in the Knesset – i.e. next Monday.

On Thursday morning, the new coalition MKs submitted a formal request to begin the process to replace Levin in an effort to speed up the process of approving the government. Nir Orbach – whose commitment to the coalition appears to be uncertain but whose support is crucial to a majority – has said he does not support replacing Levin. It has been speculated that the Joint List, an Arab party led by Ayman Odeh which is not part of the coalition, could be relied upon to remove Levin instead. The coalition’s candidate for Knesset speaker is expected to be Mickey Levy of Yesh Atid.

For whom the bell tolls

If implemented, the coalition agreement would unseat prime minister Benjamin Netanyahu after 12 years in office.

Wednesday also saw the Knesset elect Isaac Herzog as Israel’s eleventh president. Herzog, who led the Labor party from 2013 to 2018, is currently the chairman of the Jewish Agency. Herzog secured a powerful majority of MK votes, with 87 out of 120, to beat educator Miriam Peretz to the presidency. His seven-year term in the largely ceremonial role of president will start on 9 July, when he will succeed incumbent Reuvin Rivlin. “I plan to be everyone’s president to listen to any position and listen to any person”, Herzog said after his election. He continued: “It is essential to tend to the bleeding wounds in our society; we must defend Israel’s international standing and its good name among the nations; combat antisemitism and hatred of Israel; protect the pillars of our democracy”. Herzog’s Belfast-born father, Chaim, served as Israel’s sixth president between 1983 and 1993.

Should the new coalition succeed in replacing the Knesset speaker, a vote of confidence in the new government will take place as early as Monday. There remains ample time for things to go wrong, though – and Netanyahu will do all he can to make sure that happens.