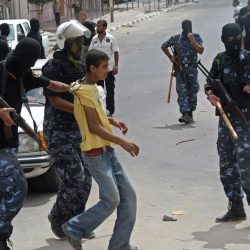 Hamas security forces arrested dozens of Palestinian activists last week in a bid to prevent anti-government protests similar to those which have rocked Lebanon. The arrests – believed to have targeted left-wing and moderate opponents of Gaza’s Islamist rulers – came as a court in the West Bank ordered the blocking of 59 Palestinian websites,[…]