Labour Friends of Israel chair Steve McCabe MP and parliamentary supporter Christian Wakeford MP have written the below article for the Jewish Chronicle. Click here to read the original. 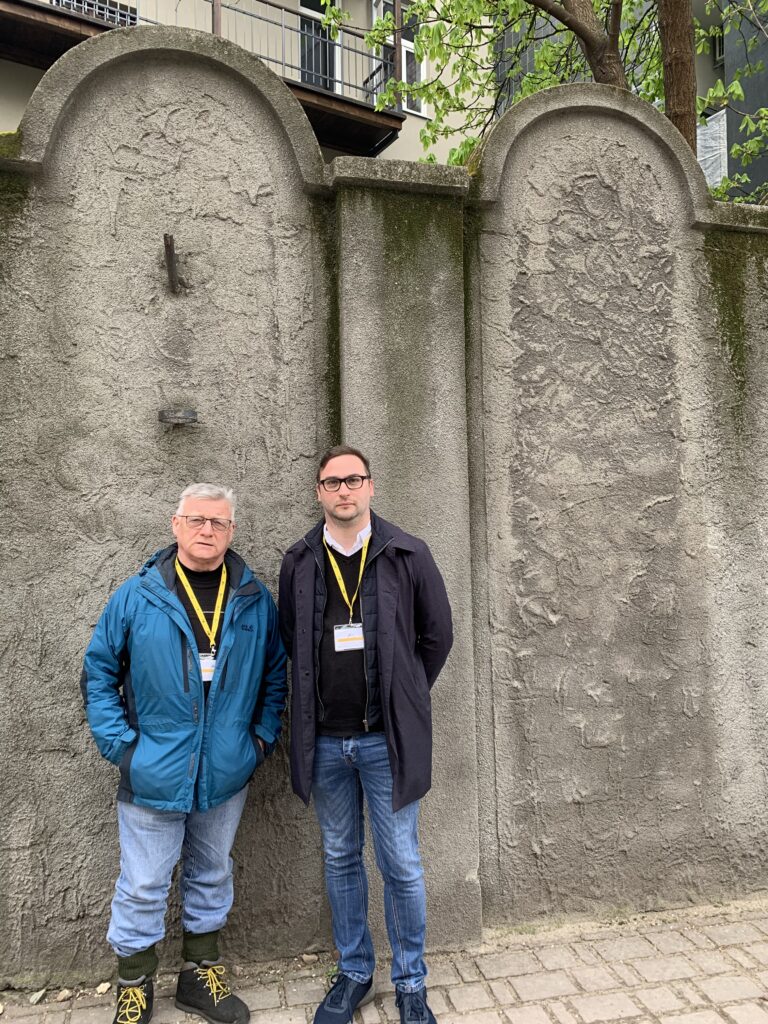 Steve and Christian at the wall of the Krakow Ghetto.

Standing in the former synagogue in the rural Polish town of Dabrowa Tarnowska, it is difficult to imagine that this town once had a population that was more than eighty percent Jewish.

Indeed, for a thousand years before 1939, Poland was the great heartland of Jewish life. Taking part in the March of the Living last week was an incredible insight into the richness and complexity of the millennium of Jewish history in Poland that preceded the Holocaust.

From the brutalist monuments for the Warsaw Ghetto to modern Krakow’s thriving Jewish Cultural Centre, and from picturesque medieval synagogues to the horrifying scale of Auschwitz-Birkenau, it is impossible not to be affected by the March of the Living experience.

To be confronted by the sites of so much death must surely push us all to learn from our continent’s tragic history, to challenge those who seek to demonise entire communities, and instil in us a resolve never to forget the memory of the murdered millions.

Without doubt, most moving of all was the opportunity to hear the harrowing testimonies of Holocaust survivors themselves. This was a unique experience remembering a unparalleled event, to which we are honoured to have borne witness.

Joining Jewish people from the UK – so many of whom have family and personal connections to the Shoah – in remembrance of the horrors that took place, was a source of light amid the otherwise incomprehensible darkness.

Because that is the reality that the March of the Living teaches: despite its grotesque scale, the Holocaust failed. Since 1945, the Jewish people have not only survived – they have thrived.

Indeed, at every site we visited in Poland – the former centre of the Jewish world – it was impossible not to keep coming back to the centre of today’s Jewish world: Israel.

Many people, especially on the left, too often fail to understand why Israel remains so important, not just to Jews here in the UK, but worldwide.

Hundreds of thousands of Holocaust survivors left Europe for a new life in the State of Israel, established just three years after Auschwitz was liberated. They not only moved to Israel, but many of them fought for it – in 1948, 1967 and 1973 – again against forces bent on annihilation.

In the Jewish state, Jews have been able to live in a security unparalleled in the millennia of their history. The sites of horror we visited during the March of the Living were but the logical endpoint of the age-old poison of antisemitism, which stubbornly continues to rear its ugly head the world over.

In Israel, Jewish people from around the world have built a thriving state, an island of liberal democracy in a sea of dictatorship, and increasingly a partner for their Arab Muslim neighbours. This future was unknown to the Nazis and their victims, but its success is a refutation of their evil ideology and a vindication of the spirit of the Jewish people.

The most common phrase associated with Holocaust remembrance is ‘Never Again’: a commitment that we must all remain vigilant against hatred and cultivate robust societies immune from those who seek to demonise entire groups of people. One cannot experience the March of the Living without a renewed personal commitment to that mantra.

Countless other lands can testify that the world has not always lived up to that commitment: Cambodia, Bosnia, Rwanda, and potentially even Ukraine.

But the existence and success of the State of Israel – for all its complexities – is perhaps the strongest affirmation of that commitment: Never Again.