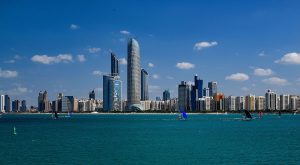 Israel and the United Arab Emirates have announced the establishment of a new $10bn investment fund aimed at boosting regional economic cooperation between the two countries. The fund builds on last summer’s Abraham Accords, which saw the Jewish state establish diplomatic relations with the UAE and Bahrain for the first time – later deals followed with Morocco and Sudan.
Financial support for the new investment fund – which is likely to focus on energy, manufacturing, healthcare, water and agriculture – will come from the UAE government and the private sector. It follows a phone call between Israeli prime minister Benjamin Netanyahu and Sheikh Mohamed bin Zayed, the crown prince of Abu Dhabi. Ahead of the general election next week, Netanyahu attempted to reap political benefits from the announcement, by suggesting the $10bn boost to the Israeli economy reflected “the Sheikh’s belief in my economic leadership”. The prime minister was attempting to save face following the embarrassing cancellation of his planned visit to the UAE last week. The historic trip was postponed after a tit-for-tat row between Israel and Jordan which resulted in the Hashemite kingdom delaying permission for Netanyahu’s plane to cross its airspace. It is the fourth time the prime minister had to cancel plans to travel to the UAE. Among the projects reportedly under consideration for the UAE fund is a deep water port in the Gulf of Eilat/Aqaba, which will create a new shipping and railway trade route between the Persian Gulf and Europe. The railway – which is currently missing only 300km in Jordan and Saudi Arabia – would be able to swiftly and cheaply transport agricultural goods and fresh produce from Europe via Israel, Jordan and Saudi Arabia to the Gulf.
Read full article