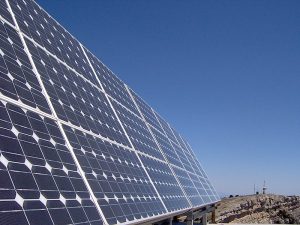 Israel, Jordan and the UAE will reportedly sign a deal by which a solar plant in the Jordanian desert would be built to generate power for Israel in exchange for a desalination plant in Israel to provide Jordan with water.

The deal is slated to be signed in Dubai next week after months of secret negotiations between the three countries.

It was reportedly billed for signing at COP26, but was instead delayed until after the passing of a budget in Israel.

Reports claim that the Biden administration has been involved in negotiating the project, with US special envoy on climate John Kerry reportedly discussing it with Israeli foreign minister Yair Lapid and Jordanian king Abdullah.

Under the deal’s terms, a UAE company will construct the solar plant in Jordan from which Israel will purchase electricity.

The deal was reportedly first formulated at a meeting in September between Israel and the UAE regarding how to broker future regional deals following the Abraham Accords.