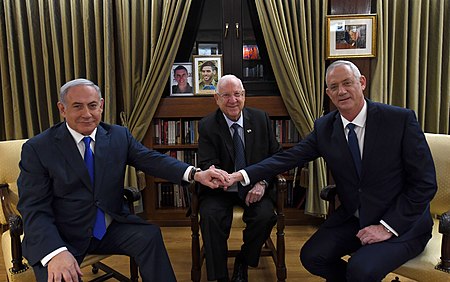 A new Israeli government was sworn in on Sunday after three general elections and 18 months of political deadlock. The Knesset approved the government – the fifth to be headed by Benjamin Netanyahu – by a vote of 73 to 46. For the first time, Blue and White leader Benny Gantz was sworn in as “alternate prime minister and future prime minister”.

Under the coalition deal between Netanyahu and Gantz  agreed last month, the premiership will be “rotated” between the two men. Netanyahu will serve for the government’s first 18 months before handing over to Gantz next November. Gantz, a political centrist and newcomer to politics who formerly led the IDF, will serve as minister of defence until he becomes prime minister. The government is expected to be less right-wing than that Netanyahu has headed since 2015. The hard right, pro-settler Yamina party has returned to the opposition benches and key posts – including foreign affairs and justice – will be taken by members of Gantz’s party.

Labor, which joined the coalition, will head two socioeconomic ministries. Yair Lapid, a former Blue and White ally of Gantz who refused to join a government led by Netanyahu, will become the new opposition leader. During the Knesset ceremony, Lapid denounced the new government. “Israelis deserves better. We’ll be here to remind them that it can be different. There is an alternative, a different leadership,” Lapid declared. Read full article