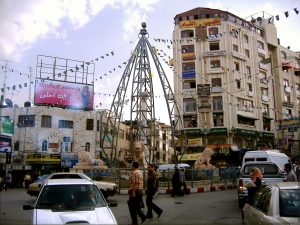 Israel has given the Palestinian Authority control over three power stations in a bid to help stabilise and boost the supply of electricity to the West Bank.
The three power stations – in Tarqumiyah, near Hebron, Qalandiyah, between Jerusalem and Ramallah, and Nablus – were handed over by the Israel Electric Corporation. The PA was given control of a fourth – in Jenin – in 2017.
Despite severing ties with Israel earlier this year, Ramallah has welcomed the move. “We welcome the cooperation between the sides and the arrangement for supplying electricity throughout the West Bank,” the Palestinian prime minister, Muhammad Shtayyeh, said. “We seek to establish a single Palestinian power company to be responsible for electricity infrastructure so as to avoid illegal hookups and a division of responsibility among dozens of suppliers,” he added.
Israel’s energy minister, Yuval Steinitz, said the decision would “dramatically improve the supply of electricity to both Jewish and Arab communities”.
The Palestinians have complained in recent years of frequent power cuts, the result of both an over-stretched system and reductions in supply caused by debts owed to Israel’s government-owned electricity company. The Israel Electric Corporation said the West Bank stations would now be able to supply power in an orderly fashion, but that that the millions of shekels in unpaid bills must still be paid by the PA. Read full article