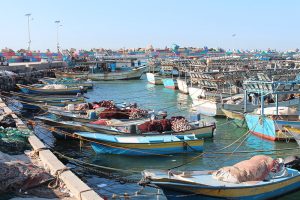 Israel announced a series of relief measures for the Gaza Strip yesterday, including expanding the enclave’s fishing zone and the approval of additional imports and exports in the wake of relative calm along the Israel-Gaza border.

The move followed international calls for humanitarian assistance for Gaza, which has been governed by the Hamas terrorist group since 2007 and was the focus of fighting between Israel and terrorist groups in May this year.

Following the conflict in May, Israel imposed some limitations on products entering the Strip until two Israeli civilians and the remains of two IDF soldiers were returned from Hamas captivity.

These restrictions did not apply to food, medical supplies, fuel, animal fodder or raw materials for critical industries.

Two crossings into Egypt, at Rafah and Salad a-Din, have also been open for goods and pedestrians for some weeks now.

Israel’s military liaison body to the Palestinians, the Coordinator of Government Activities in the Territories, announced a further easement of measures on Monday.

From this week, the area in which Gaza fishermen can sail is expanded from 9 nautical miles to 12, while additional medical equipment, fishing gear and raw materials for local industries will be permitted through the Kerem Shalom crossing with Israel.

These changes followed a meeting between Israeli foreign minister Yair Lapid and his Egyptian counterpart Sameh Shoukry in Brussels.