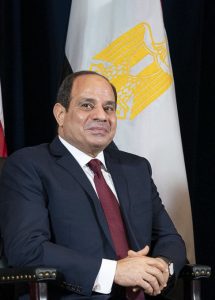 The leaders of Israel and Egypt, Naftali Bennett and Abdel Fattah el-Sisi, held the first open talks in a decade on Monday as Bennett flew to Sharm el-Sheik.

The leaders discussed rising tensions in Gaza, where both countries have imposed border restrictions in recent months.

An increase in cross-border violence since August has tested the fragile ceasefire in Gaza, negotiated following 11 days of violence in May 2021.

Over the past week, Palestinian militants have fired rockets into Israel for three nights in a row, prompting Israeli air strikes in response.

In a statement, Sisi’s office said that he “affirmed Egypt’s support for all efforts to achieve comprehensive peace in the Middle East, according to a two-state solution”.

He also said that the two leaders discussed a dam being built by Ethiopia on the River Nile. Egypt views the project as a threat to its water supply.

Speaking after the meeting, Bennett said: “Israel is increasingly opening up to the countries of the region, and the basis of this longstanding recognition is the peace between Israel and Egypt”.

“Therefore, on both sides we must invest in strengthening this link, and we have done so today”.

Egypt became the first Arab country to make peace with Israel in 1979, but relations have rarely warmed, remaining limited to security cooperation and some economic ties.