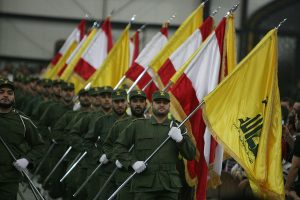 Hezbollah’s popularity has dropped sharply in Lebanon – even among its core Shia supporters, a new poll has suggested. The percentage of Shia who say they have a “very positive” opinion of Hezbollah, while still a majority, is almost 20 points lower than it was in late 2017.
“This trend almost certainly reflects increasing anger at Hezbollah’s role in the corruption, intimidation, and acute economic crisis plaguing the country, accelerated by its perceived responsibility for the devastating explosion in Beirut’s port last August,” suggested David Pollok of the Washington Institute for Near East Policy in his analysis of the poll.
Hezbollah’s support among the Shia is still markedly higher than among Lebanon’s Christian and Sunni communities. Sixty-six percent of Shia voters continue to express a “very positive” opinion of Hezbollah – down from 83 percent in 2017 – while an additional 23 percent hold a “somewhat positive” opinion of it. By contrast, just 16 percent of Christians and eight percent of Sunnis now report even a “somewhat positive” view of Hezbollah, with around 60 percent of both communities holding a “very negative” view of the terror group, which is also a political party in Lebanon.
The survey also found broad support for the recent Lebanese-Israeli Mediterranean border talks – the first talks between the two countries in 30 years – with 70 percent of Sunnis, 67 percent of Christians and 51 percent of Shia labelling them a “positive development” and only 19 percent of all Lebanese expressing “strong” disagreement. By contrast, two-thirds of Christians and three-quarters of Sunni and Shia said they regard the recent normalisation agreements between Israel, Bahrain and the United Arab Emirates as at least “somewhat” negative with around 40 percent of all groups saying they are “very” negative. The poll also found sharp divisions within Lebanon on the importance of the country having a good relationship with Iran.
Read full article