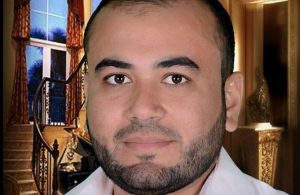 Hamas has been recruiting minors to carry out terrorist attacks, Israeli security forces have said. Two Palestinian minors, including a 16-year-old, were arrested last month after Hamas recruited them over the internet, Shin Bet has revealed. They have now been indicted by the Juvenile Military Court.
The two minors were to be provided with weapons, ammunition, uniforms and money to carry out attacks – including shootings and kidnappings – against both civilians and soldiers in the West Bank. The pair also attempted to manufacture a pipe bomb, according to the Shin Bet statement, and were asked to gather information about settlements and the movement of soldiers.
Hamas told the pair that it would pay them and take responsibility for their attacks. The recruitment was carried out “frequently and over several months” on various social networking sites. The Shin Bet named Bilal Kardi (pictured) from Hamas’s cyber unit as the recruiter. “The investigation illustrates the extent of Hamas’s borderless efforts to promote terrorist attacks and terrorist infrastructure in the West Bank while exploiting minors and harming their families,” the Shin Bet said. It added that it would “continue to work to thwart Hamas’s efforts in the Gaza Strip to establish a terrorist infrastructure in the West Bank to promote terrorist attacks in Israeli territory and undermine regional stability.”
Read full article